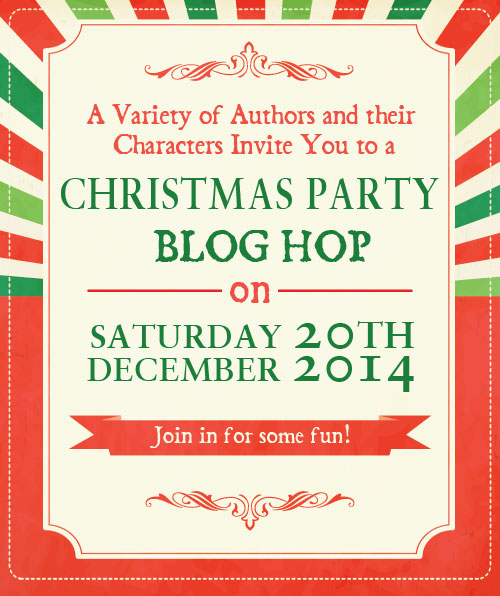 Together with 25 other authors, today I’m taking part in a special Christmas Party Blog Hop, organised by the ever-generous historical novelist Helen Hollick.

Each of us  is running a party-related post on our blogs today. You’ll find mine below here, followed by a list of links so that you can hop over and enjoy all the others’ goodie too. Some of them are even offering virtual party bags – a prize for a lucky winner who will be chosen after the hop is over.

First stop is my free short story, one of the 12 lighthearted tales in my new Christmas collection, Stocking Fillers,  now available to order in paperback or ebook from all the usual retailers, online and on the high street. It makes gentle mockery of the supposedly perfect Christmas dinner, which somehow never materialises in my house…

Until this Christmas, I’d never believed that anybody really used the kind of fancy Christmas table setting that you see featured in every glossy magazine this side of September.

You know the sort I mean. They’re always pictured in rooms absolutely dripping with home-made swags of holly, gathered fresh from your vast and well-kept garden, of course. Enormous dinner tables for implausibly large family gatherings sport wildly impractical damask tablecloths, the sort of thing that would never withstand the onslaught of gravy, red wine and Ribena that accompany Christmas dinner in our household. There’s usually a breathtaking centrepiece, or even a whole series of little installations running down the table: bonsai’d holly trees; sculptures made from gilt-sprayed pine cones; exotic flower arrangements, each worth about as much as the turkey.

The dining chairs are festooned with gold bows or swathed with tartan. The vast array of cutlery promises at least five courses. Half a dozen crystal glasses suggest these will be accompanied by champagne, white wine, red wine, desert wine, sparkling water (probably Fijian), not forgetting the after-dinner brandy or liqueur.

As to the china, it’s either exquisitely simple, price rising in inverse proportion to the degree of decoration, or it’s a wittily mismatched medley of vintage Christmas designs, picked up for a song at a little market in Provence.

It goes without saying that in such a setting, the conversation among your most intimate friends and family would be no less than sparkling.

I’m never sure when the hostess is meant to find time to set up such an ornate display. After all, the same magazines usually implore us to start the day with a light but elegant spread of fresh home-made bread, croissants and smoked salmon, washed down with Bucks Fizz (not the sort that comes ready-mixed in a single bottle). They make us feel inferior if we’re not also rustling up the most complex combinations of vegetables to accompany our exotically stuffed turkey or goose. Now I’m lucky in that cooking comes easy to me, but I just can’t be doing with the rest of it. I’d rather spend more time relaxing with my family than handcrafting centrepieces for the dinner table.

In the odd spare moment, we hostesses are meant to style our hair to perfection, slick on this season’s show-stopping festive make-up, and slip into the elegant silk cocktail dress that our perfect husbands have surprised us with, alongside our Christmas stocking crammed with designer toiletries, none with a price tag of less than three figures.

Christmas looks rather different in our household. Even if I were to conjure up such a vision of domestic bliss, it would be lost on my husband Kevin and our ten-year-old son Ben, which is why I was pleased to accept my cousin Moira’s invitation to have Christmas dinner at their place. For once I’d be off the hook from feeling a failure for not matching the ideal trumpeted by so many women’s magazines.

We’d never been to Moira’s for Christmas dinner before, but as this year Christmas Eve coincided with her silver wedding anniversary, she and her husband Douglas had invited all the family to celebrate. What on earth possesses people to get married at Christmas, I wonder. Isn’t life complicated enough? It’s like choosing to have your birthday on New Year’s Eve. A normal person just wouldn’t do it.

Alarm bells started ringing as soon as we approached their front door, from which was suspended a picture-perfect wreath of real holly, heavy with clove-studded oranges and tartan-wrapped bundles of cinnamon sticks. Matching ribbons festooned the fairy-lit bay trees that stood sentry on either side of the front door.

“At least you don’t have to water plastic holly,” I said brightly, thinking of our own tatty wreath, which we’ve used for as many years as we’ve been married.

Moira shimmered to the door in a silvery silk sheath dress. Perfectly made-up and accessorised, she had not a hair out of place. As it was her silver wedding, I forgave her. Inside the hall, the banisters sparkled with elegant silver-dipped ivy. It looked as fresh as if it was growing there. Glittering above our heads were levitating silver stars, presumably suspended from hidden wires

Once Moira had taken our coats, she beckoned us into the lounge. On a snow-white tablecloth were dozens of expensive delicatessen canapés, displayed like high art on silver cake stands nestling among a forest of miniature potted Christmas trees and frolicking velveteen reindeer. I felt like we’d been asked to eat Narnia.

“Mum, why don’t we ever have stuff like this at home?” hissed Ben, seizing three cheese straws in each hand.

“Daddy and I haven’t been married 25 years yet,” I improvised, false smile plastered on my face like make-up. And there was me thinking I’d done well to buy Ben festive star-shaped Hula Hoops.

The dining room table was no less impressive. To the right of each place setting stood six frost-topped crystal glasses, which I knew from an article I’d just read was done by painting on egg white with a brush and rolling the glass in caster sugar. To frost so many glasses would require a labour force the size of Santa’s.

The centrepieces had moved up a notch from Narnia to focus on the openly religious. Silvery angels were doing some kind of synchronised flying beneath an ice sculpture shaped like a giant star. I could tell Ben was itching to break a bit off an icicle to eat, so I held his hand firmly in mine, hoping to look like an affectionate parent rather than a police officer carrying out a restraining order.

I was glad the metre-square silver gauze napkin provided concealed my less than glamorous denim skirt, though I knew I’d be wiping my hands on my skirt rather than spoil the napkin. But I admit I was looking forward to having my Christmas dinner cooked for me.

And that’s when things started to go wrong.

“I’m afraid the cream of chestnut soup is just a little scalded,” Douglas apologised as he circled the table, whisking away snow-white soup plates. The smoke billowing from the closed kitchen door suggested his explanation was an understatement. “So we’ll be moving straight on to the fish course.”

At that point a shriek came from the walk-in larder. “Bloody cat!”

Moira appeared in the doorway, fanning her slightly flushed face with a paper plate.

“I’m so sorry, everybody. Barnaby has been a naughty boy with the salmon. Let’s fast forward to the palate cleanser. Douglas, sorbet, please!”

Douglas obediently produced from the kitchen a silver salver filled with tiny tin foil tart cases. “Cranberry sorbet,” he explained when Ben picked one up to sniff it.

“What’s a palate cleanser, Mum?” Ben asked loudly. “Is it like paint stripper?”

“No, not that sort of palate, Ben,” I whispered. “It’s what you eat between courses to get rid of the taste of the last one.”

“But we haven’t tasted anything yet,” he replied at full volume.

“Please excuse me a moment while I go to carve the bird,” announced Douglas. “Or rather, birds. We’ve got a multi-bird roast. You know, a quail inside a pheasant inside a chicken inside a turkey inside a goose.”

“Does that count as cannibalism?” piped up Ben.

As I shushed him, Moira began to set down snow-white vegetable tureens. I wondered what magical mixtures of vegetables lay inside. She lifted the lids.

Kevin, normally fond of vegetables, sniggered again. I tried not to gasp at the twin pools of orange and green slime. They looked like the stuff Ben plays with in the bath.

“Are you sure that’s not the paint?” Ben hissed. “For the palate cleanser?”

“Is that a brick?” he enquired.

“They’re exactly the colour of my yellow Playdoh.”

Next Douglas bustled in bearing a vast silver platter. The concentric rings in each meaty slice made me think of the cross-section of a tree trunk. This impression was reinforced when I tried to cut into my serving with the only knife I’d yet had occasion to use.

When it came to the Christmas pudding, suffice to say that brandy wasn’t needed to set it alight. It had already clearly been in flames, accounting for the loud bang that came from the kitchen just before the microwave timer pinged. Shop-bought mince pies, hastily produced from packets in the absence of anything else that was truly edible, were the only things of any substance that we ate.

“Well, at least we’re tackling these with a clean palate,” said Kevin in a voice only slightly lower than Ben’s.

To be fair to Moira and Douglas, they did keep filling all six glasses, which is why, by the time we got home, Kevin claimed not to remember anything about the meal. I was glad I’d volunteered to drive and felt entirely virtuous raising a toast over the smoked salmon soufflé and tossed salad that I’d rustled up for tea when we got home.

“To the best Christmas dinner I’ve ever had!” I chinked my glass against Ben’s Ribena. “But maybe next year we’d better invite Moira and Douglas to ours.”

If you enjoyed this story, you might like to read the other 11 in the collection. Stocking Fillers is now available to order as a paperback or ebook from all good retailers, on the high street and online.

I’m pleased to offer a party bag to one reader chosen at random a week after the hop is over. It will include:

To enter the draw, just leave a comment at the foot of this post. The draw will be made on 1st January 2015. I figured that winning a prize on the first day of the new year would be a nice start to 2015 for somebody! Good luck!

Now on with the Party!

Thanks for reading my party post – now hop on down the list to enjoy further festive entertainment! (I’ve tested all the links pre-launch, but if any don’t work for you, please let me know by leaving a comment.)

Finally, a huge thanks to Helen Hollick for organising this blog hop. If you need a good read to tide you over the dark nights of the Christmas holidays (or to read on the beach if you’re in the southern hemisphere!), I’d recommend any of hers.

With best wishes for a wonderful party season – and a happy and healthy new year.