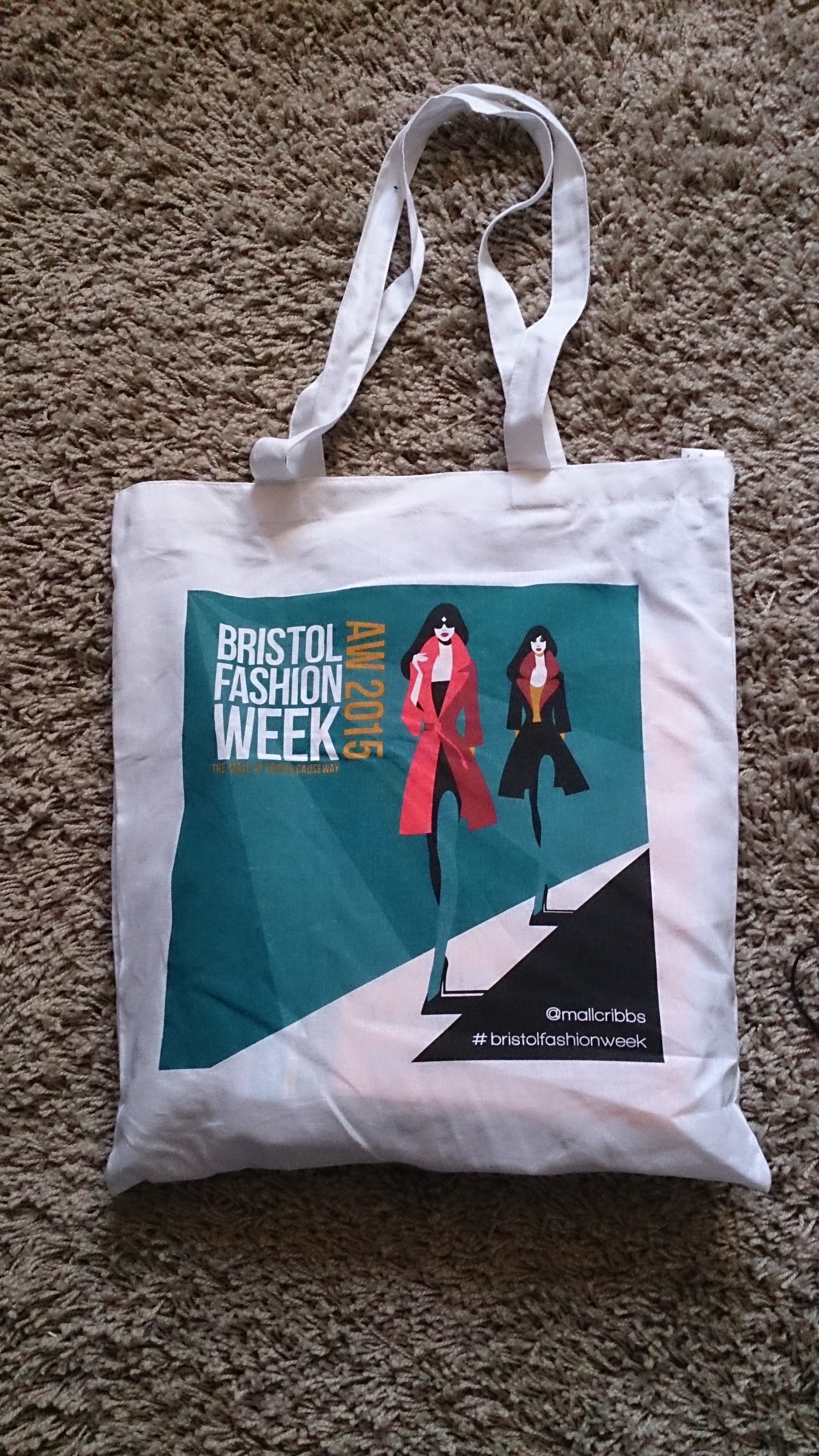 A trip to the Bristol Fashion Week Show (Autumn/Winter), staged at our nearest out-of-town shopping mall, The (imaginatively named) Mall, at Cribbs Causeway near Bristol, has become a twice-yearly treat for my sister, my daughter and one of her friends. But the contents of the goody bag we brought home this time has set me wondering whether they organisers are trying to send a secret message to audience members about their own appearance and demeanour…

For the price of a cinema ticket, we’re treated to a glamorous spectacle in a large black marquee, lined with about 500 chairs either side of a large catwalk (runway to you, my American friends). It’s regularly hosted by television fashion stylist Mark Heyes, a cheery, warm chap who makes the audience feel right at home, and this year he was joined by the lovely Denise Van Outen, the famous and elegant actress who is just the right fit for this kind of audience – mentioning her young daughter and her love of high street shops made her seem more like a friend than a celebrity.

With glitzy AV effects and light shows, and the odd puff or two from a smoke machine, it feels like there’s all the glamour of London Fashion Week, but without the mad hairstyles or eccentric make-up, or the cutting-edge designer clothes showcased in the national press after their shows. Funky choreography set to pop songs adds drama and ups the cool factor.

By contrast to the London shows, at The Mall’s event, the clothes are sourced from familiar chain stores such as John Lewis and Marks and Spencer, the anchors of this shopping centre. The models are all interesting and different, including two cute kids to appeal to our maternal instinct, an older lady with white hair, a healthy ethnic mix, and one  “plus-size model” (which I interpret as any number above size)  – although my grandmother would have said of the leaner ones “I don’t know where they keep their organs”.

Making it even more accessible and meaningful to the audience is a special feature when they introduce a member of the public to whom they’ve given a makeover – a different one at each fashion show, which is very generous of them. People are invited to apply in advance for the privilege, and the lady featured in the show we saw, Jo Perrin, had been chosen for her story about feeling low after being made redundant. Not only did they give her a lovely new haircut and outfit, but when they took her into Marks and Spencer to choose her outfit to model, she was invited by the manager to apply for a job there, which she promptly got! A lovely touch of real life and a feel-good factor quite different from what you’d expect at a fashion show.

Exciting Win for our Party

Another highlight of the show is the prize draw. Each audience member is given a numbered ticket on arrival, and the prize varies from year to year. This year’s prize was a personal styling session plus various treats from John Lewis. Both my sister and I had a feeling that we might win this time, so we were overjoyed when my daughter’s friend’s ticket was the winning number. (Cue for a big “aaah!” from the audience when they realised a little girl had won!) We were so pleased we even forgave Denise Van Outen for pronouncing her name wrong when she presented her with the prize.

Even so, it was a great night out for less than a tenner a head, and we’re looking forward to the next one already. Well done to the whole team responsible, and thanks for all the fun.

For more info about the fashion show via the Mall’s website, click here. If you fancy going to a future show, book early, as the seats quickly sell out.

Here are the twitter links for Denise Van Outen, Mark Heyes, Jo Perrin, The Mall and Marks and Spencer, where you can see heaps more photos and videos of the event.

Here are some other posts about my own dubious take on fashion (cue scornful laughter from my 12-year-old daughter Laura):

PS This is not a sponsored post, just a bit of fun