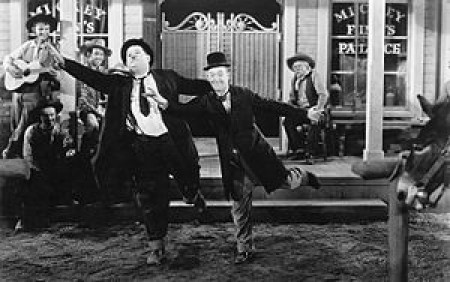 On the eve of World Diabetes Day, as Laura and I watch one of our box set of Laurel and Hardy DVDs, I discover that the great Stan Laurel was diabetic.

I’ve learned this fact in my newly acquired pocket guide to their films. Laura is delighted to hear it: their shared illness provides a new bond with her comedy hero.  (Watching the credits earlier, she wished aloud that his surname was spelt with a second ‘a’ instead of an ‘e’ so that it was just Laura with an ‘l’ at the end.)

It’s always good to discover new diabetic role models.  It’s not that we’re rejoicing in their misfortune, but I’ve told Laura since her diagnosis at the age of 3 that diabetes won’t stop her doing anything she wants to in this life and it’s good to have proof. I may have over-played this point: she once showed me in a guide to adult education classes a picture of a lady doing an extraordinary gymnastic feat, saying “I think she must be diabetic, because you said diabetics can do anything”.

Laura loves old comedy films.  Having watched Laurel and Hardy’s complete output, she’s now working her way through the Marx Brothers.  Doting mother that I am, I wonder sometimes, whether, with her precocious sense of humour and her clever way with words, she will be a comedy writer or performer herself one day.

If that’s what she wants to be, diabetes won’t stop her.  But had Laura been born into the era of silent movies, she wouldn’t have had the chance to even try.  If diagnosed before 1928, she’d have been dead within weeks. The early silent films we have been watching predate the discovery of insulin and the development of insulin therapy.  (Stan Laurel became diabetic in the 1940s.)

But even now, insulin doesn’t cure diabetes – it simply holds it at bay.  Laura would die without multiple daily injections or infusions of insulin (and by infusions, I don’t mean a tea-type drink – I mean insulin injected into her flesh through a canula embedded in her stomach).  She also needs many blood tests every day to help us decide how much insulin to give her.  What we still need, so badly, is a cure.

And maybe, just maybe, one day, if Laura’s name is up in lights as the 21st century’s answer to Laurel and Hardy, her biographer, unlike Stan Laurel’s, won’t need to mention her diabetes – because if enough people support the research into a cure, by then it will have been vanquished, edited out and left on the cutting room floor.  Well, a mother can dream.

(Click here for more about Laura’s passion for Stan Laurel)

Tonight I have the pleasure of introducing my six year old daughter Laura to Laurel and Hardy, as together we watch a DVD of their short classic film ‘The Music Box’. This endearingly silly tale of their attempt to deliver a pianola to a house at the top of a long flight of steps demonstrates their perfect comic timing and chemistry.  It also contains ample reminders that the silent film era had only just ended, with some of the other characters clearly  trained before the spoken word was at their disposal.
At first Laura is bemused by the monochrome footage.
“I wish it was in colours,” she says, used to bright Disney Pixar animations.
I explain that when the film was made, nearly 80 years ago, they only had the technology to make films in black and white.
“No, Mummy, there’s grey in there too.”
I have a vivid memory of my grandfather watching the same film on television about 40 years ago, when black and white television was all we had.  He was in rosy paroxysms of laughter, as he must have been when he’d first watched it in his youth.  Tonight his great-granddaughter is  in much the same state, totally immersed in the pair’s misadventure as she shrieks in delight at their mistakes.
.
“You don’t need to do that!” she shouts, as they lug the piano back down the steps, following the postman’s advice that they could have brought it up more easily by the sloping approach road.   She leaps to her feet to join in their tapdance, executed as they unpack the pianola from its wooden case.
At the end of the filmshe is clamouring for more, but bedtime intervenes, and she has to make do with the promise of another Laurel and Hardy film tomorrow.  I will look out my ancient video of ‘Way Out West’, featuring that sublime dance routine on their way into the saloon. I must have seen it hundreds of times but it still transfixes me every time.
Will my great grandchildren watch  the comedy favourites of my youth?  Morecambe and Wise, The Goodies’ giant kitten, Monty Python’s dead parrot, Tommy Cooper, Mr Bean, Fawlty Towers?  I’d rather put my money on the timeless Laurel and Hardy than on any of them.  Matching their achievement is still the ultimate comic Holy Grail.  But the best double acts aren’t only about comedy: for me, my daughter and I are up there with the greats.