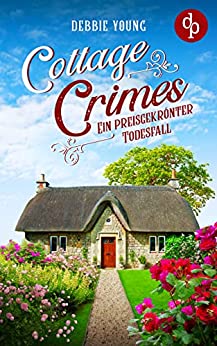 I’m delighted to announce the launch today of my first ever foreign language edition, thanks to my new German publisher, DP Verlag.

I’m really pleased with their presentation of the book. As this was a trade deal, I had no input into the design, so I was thrilled when I saw their beautiful, eye-catching cover design and series branding.

It’s especially appropriate that Sophie’s first foreign venture is in German, because at the start of the story, she is living in Frankfurt, working at an international school, when she inherits her great-aunt’s cottage in the Cotswolds.

The reason I planted her in Germany is that I too used to live in Germany, thanks to my father’s employer, Burroughs Corporation, a computer company. His job had previously taken us to live in California for a year when I was eight years old, and when I was 14, we had the chance to relocate to Germany. I spent the last four years of my secondary school education at Frankfurt International School, which had pupils from over 60 different countries on the school roll.

Funnily enough, just a week ago, I was in conversation with the current Upper School Principal, John Switzer, who is doing a survey for his doctoral thesis about the impact of taking the International Baccalaureate on the lives of its former students. I was pleased to tell him that not only had the school broadened my outlook and made me many lifelong friends, but it had also helped inspire my first novel. I’ll be sure to send him a link to the new German edition!

If you’d like to practise your German, here’s a screenshot of the book’s page on Amazon.de, where it’s currently riding high in the charts:

And here’s the first review – thanks to Koetzi for being so quick off the mark on publication day!

DP Verlag have also published an interview with me on their own website, which you can read here.

The company has also bought the German translation rights for the ebooks of the next two books in the series. I can’t wait to see how they turn out!

I have to thank my agent Ethan Ellenberg of the Ethan Ellenberg Literary Agency for introducing my books to DP Verlag. I’m hoping this is the first of many translations of my books!