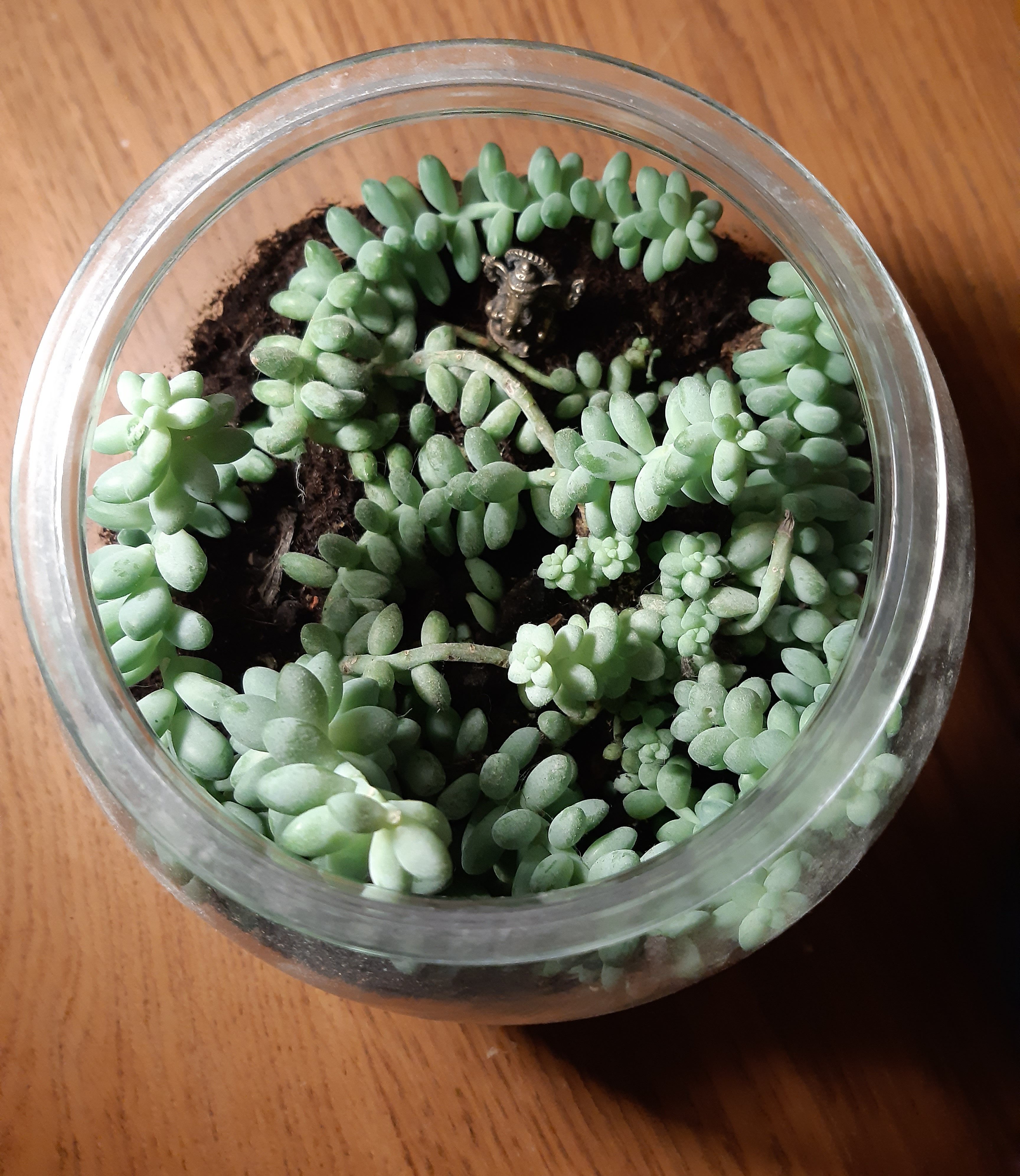 In this month’s issue of the Hawkesbury Parish News, I create my own indoor spring

In the middle of a grim January in which fog and frost have rendered the local Cotswold landscape monotone, I crave the sight of colour. I know that even just looking at greenery is scientifically proven to offer mental health benefits, but I’m unable to buy any from shops as they’re not essential foodstuffs. So I ask on the local Facebook Second-to-None group whether anyone has spare houseplants in need of a good home, ie mine.

Immediately a flurry of kind offers pops up, including some plants rumoured to be unkillable.

By all accounts, the spider plants and aloe veras are likely to outlive me. I must remember to provide for them in my will.

Further investigation shows that house plants can serve other functions besides lifting your spirits, such as clearing toxins from indoor air. No less than NASA has run tests of three common houseplants to see which was best at removing formaldehyde, with spider plants emerging the clear winner.

Indoor pollution prevention in a plant pot should be handy on the International Space Station, not to mention making the place feel more homely.

Apparently certain palms, ferns, peace lilies, ivy and rubber plants are even better at extracting chemical vapours indoors, although I’m not sure what they do with them once they’ve collected them. Interior design specialists credit houseplants with reducing headaches, sore throats and other minor ailments in the workplace and the home.

Aloe vera is another plant no home should be without. Keep one by the cooker as a first aid measure and apply the juice of a leaf to burns to speed healing. Aloe vera is also anti-inflammatory, promotes circulation, and inhibits the growth of bacteria. A multi-million-dollar industry, Forever Living, has been built on aloe-vera-based products.

According to Marina Pogose, aloe vera “grows like the devil”, so I’m guessing the company never runs out of stock.

A few days after I’ve distributed my new houseplants about my home, I visit my GPs’ surgery for my annual health MOT, where I’m startled to learn that I weigh the same as I did at the start of the first lockdown and my blood pressure and pulse, which were healthy enough then, have actually improved. I’ve scarcely been out of doors for a year, and I’ve done very little physical exercise, so there can only be one reason that I’m doing so well now.

When I find out which of my new houseplants is responsible, I’ll let you know.

With grateful thanks to Chris, Jenny, Jill, Kate, Maia, Marina and Penny for all their kind offers of plants.

To celebrate having lived in Hawkesbury Upton for thirty years, I’ve just published in paperback and as an ebook Still Charmed, my latest collection of columns for the Hawkesbury Parish News, written from 2016-2020 – an extraordinary period that saw huge change around the world. The book is available to buy online via the links below.

Many years ago, when the New Age was still new, I bought at a festival a t-shirt with the slogan “Whatever age you are now, you are every age you have ever been.”

The notion particularly caught my fancy because the previous week at my office, when someone said something about Little Tikes ride-on plastic cars for toddlers (remember them?), our sixteen-year-old receptionist piped up, “Oh yes, those are great fun, I love those.” It was a sobering reminder to her older colleagues that she was not far removed from toddlerhood herself.

This month that t-shirt slogan has again been front of mind following two recent encounters connected with my own younger years.

First came a reunion with my aunt, who had emigrated to Canada in 1970. I hadn’t seen her for twenty-nine years, and last time I saw her, she was younger than I am now. But as with all the best relationships, and with family ties in particular, we picked up where we left off, and it felt as if no time had elapsed at all.

Then yesterday I was reunited with the boy next door from my suburban childhood home. When I last saw him forty-nine years ago (yes, I am that old and more), Little Tikes cars hadn’t been invented, but he’d ride shotgun on my much-loved big white tricycle as we careered around our large back gardens. As we reminisced about the fruit trees that we used to play beneath, he described the taste and texture of their russet apples as if it was only yesterday.

These vivid illustrations of how much time I’ve spent on this earth – and by implication, my mortality – might alarm me, if I hadn’t been involved lately with a heartening project involving elderly people, inspired by the National Dignity Council’s Dignity in Care campaign. (www.dignityincare.org.uk)

As a volunteer at a local care home, my brief was to set down in the residents’ words what dignity means to them. I anticipated a discussion about respecting senior citizens, but what emerged was a wide-ranging conversation full of wise counsel about childhood, parenting, and society at large.

I’m planning to add a lot more ages to my collection yet, and if when I’m old, I end up as sage and as generous as these dignified and gentle folk, I shall consider my life very blessed. I just hope my t-shirt will hold up after so many years of laundering.

Hallowe’en in our village seems to have had an identity crisis this year, disguising itself as the season of goodwill.  By the time we return from my small daughter’s first venture into trick-or-treating, we are overwhelmed by our neighbours’ generosity.  Laura is positively radiant – and not just because of the fluorescent nail polish applied earlier by her best friend’s mum.

“I just LOVE trick-or-treating!” she breathes ecstatically as we trek round the village.

We bump into most of her schoolfriends en route, plus quite a few teenagers, all impressively attired.  Not for our village the media stereotype of  big kids in half-hearted costumes harassing old ladies.  A group of teenage witches welcomes my little black cat to tag along with them at a couple of houses.  Some big boys in ambitious costumes, one apparently a wild animal in a tardis-like cage, politely offer her a biscuit.  The packet had just been cheerfully dispensed by a man whose greeting  was “Sorry, I’ve run out of sweets and I’ve run out of money, but here, have these cookies instead”.

Many adults have gone to as much trouble as the children to get into a spooky mood. They’ve festooned their houses with paper bats and ghosts, they  answer the door in costume and character.  One kind couple has made up goody bags of assorted chews that includes a set of plastic vampire teeth.  “I’ve always wanted one of those!” my daughter squeals with delight.  She’ll need new teeth if she’s going to eat her way through tonight’s haul.

Another lady has set up a grisly pick-and-mix in her front porch, chocolate eyeballs and bloody jelly fingers dispensed from dishes proffered by severed hands.

“She’s so kind,” my daughter remarks, slipping her hand into mine as we walk on down the lane.  “Someone really ought to give her  special treat too.”

At the next stop, we’re invited in for some jokes, a chocolate biscuit and an interesting lesson on the Celtic origins of the Hallowe’en tradition.  The adults are clearly having as much fun as the kids.

We head back towards home, looking out for lit pumpkins, the accepted indicator of a household that welcomes trick-or-treaters.  We pass by the home of one of the oldest ladies in the village.

“She hasn’t got a pumpkin, but do you think we should call on her anyway? She’s a very kind lady and always smiles and waves to us.”

Laura’s clearly convinced that Hallowe’en is all about generosity of spirit.  I shake my head.  “No pumpkin, no visit,” I remind her.

But what pumpkins we have seen!  Hours of carving must have gone into many of those on display.  Their fine fretwork depicted cheery toothy grins with varying degrees of menace, witches on broomsticks, moon-lit landscapes, angry cats arch-backed with vertical fur.  How many more ended up as soup following a slip of the knife in these artists’ quests for perfection?

Our own pumpkin, less elaborately carved, gave me a fright the night before.  Having nurtured it to a vast size in the garden all summer, we placed it proudly on the front wall in readiness at dusk, only to find it had vanished by the time night fell.  I was devastated.  How could someone stoop so low as to steal a pumpkin the night before Hallowe’en?  What sort of person does that?  Someone warming up to pinch our Christmas tree a few weeks later?

My outraged SOS on Facebook triggered a sympathetic search. By mid-morning a kind neighbour has discovered it on his front drive.  It’s too far for it to have rolled, so how on earth did it get there?  Why did the pumpkin cross the road?  I can’t help but wonder.  Well, I suppose this ancient festival has had the last laugh.  For all the outpouring of generosity in our village, Hallowe’en has still kept a trick up its flowing black sleeve.