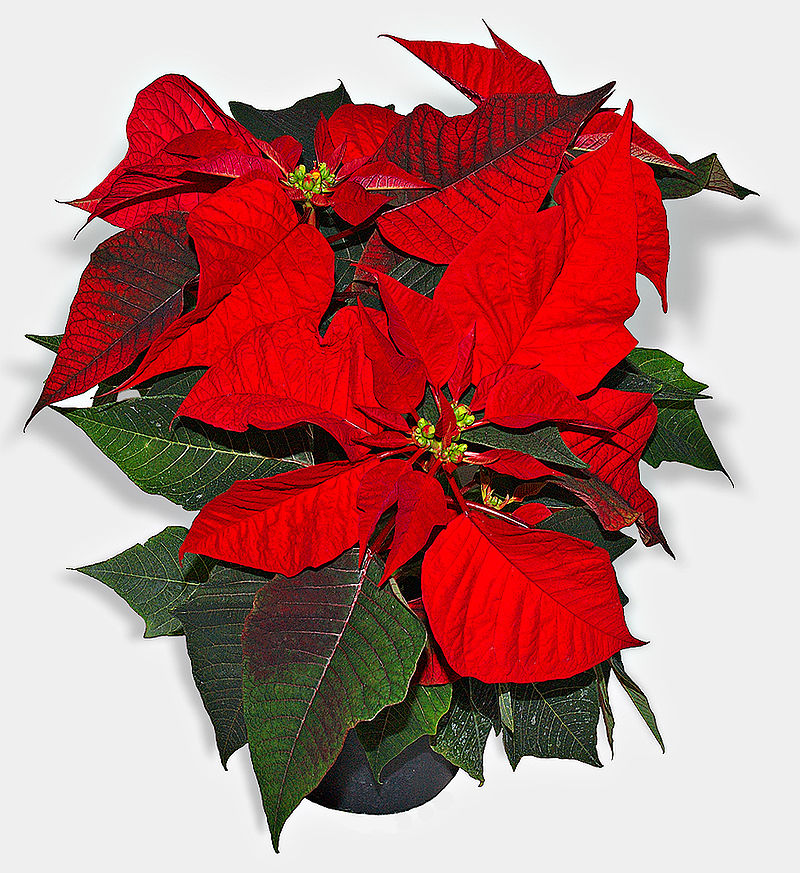 When I was a child growing up in a London suburb, one of the highlights of our festive season was to sing carols around the huge Christmas tree in Trafalgar Square.

Although this may sound like a very English tradition, the Trafalgar Square Christmas tree is not British at all, on two counts.

Evergreens of other kinds, such as holly, ivy, and mistletoe, have been part of a British Christmas for centuries. Borrowed from pagan winter festivals, they symbolise the promise of new life, whether in the form of spring or the birth of Christ.

The poinsettia, however, is a relative newcomer to the traditional Christmas canon of plants. Until recently, I’d assumed the only reason it pops up in shops in December is because of its festive colours. Not so.

The connection comes from a sweet Mexican legend…

A little Mexican girl was fretting because she was too poor to buy a birthday gift for Jesus, to lay at her local church’s manger scene, in keeping with village tradition. Suddenly an angel appeared, telling her to gather weeds from the roadside, because what mattered was not the cost of her gift, but what was in her heart. Her neighbours were scornful when she brought a bouquet of green weeds to the church, but in a heart-warming Christmas miracle, as she set them down on the altar, red flowers sprang up among the green leaves in the shape of the star of Bethlehem.

My first slightly frivolous thought on hearing the story was that it’s a Mexican take on my favourite carol, “In the Bleak Midwinter”: “What can I give him, poor as I am? I know, I’ll bring a poinsettia.”

As you probably know, the red parts of the poinsettia technically aren’t flowers at all, but leaves that have turned red. Its flowers are the tiny yellow buds at the centre of each cluster of red leaves. But modern botanical definitions don’t detract from the power of the legend.

While the name we use for the plant commemorates the American diplomat, Sir Joel Roberts Poinsett, who first imported cuttings from Mexico to the US in 1836, in Mexico, it’s known as flor de Navidad (Christmas flower) and flor de Nochebuena (flower of the Holy Night). The closest the Mexicans have to a Christmas tree is a decorated cactus.

Whatever greenery you choose to decorate your home this Christmas, I wish you joy and peace this festive season, and a New Year full of new life and hope.

This article first appeared in the Hawkesbury Parish News, December 2021

Whether you are still Christmas shopping or you would some lighthearted and uplifting books to read during the holidays, you might like to take a look at these seasonal reads.

I’ve provided buying links in case you’d like to order them, but if you have any problems placing orders online, just let me know and I’ll arrange to send them to you myself.

Murder in the Manger – the third Sophie Sayers Village Mystery, a gentle, feel-good story that kicks off when the nativity play penned by Sophie goes somewhat off-script…

Stranger at St Bride’s As the staff and girls at St Bride’s prepare for their annual Christmas Fair,  stranger turns up to lay claim to the estate, and the fight to save the school is on!

Stocking Fillers – the antidote to pre-Christmas stress, 12 funny stories about different aspects of the festive season, easy quick reads that make the perfect Secret Santa present or indeed a gift to self!

Lighting Up Time – this short story is set at the winter solstice, available in a slim paperback the size of a picture postcard