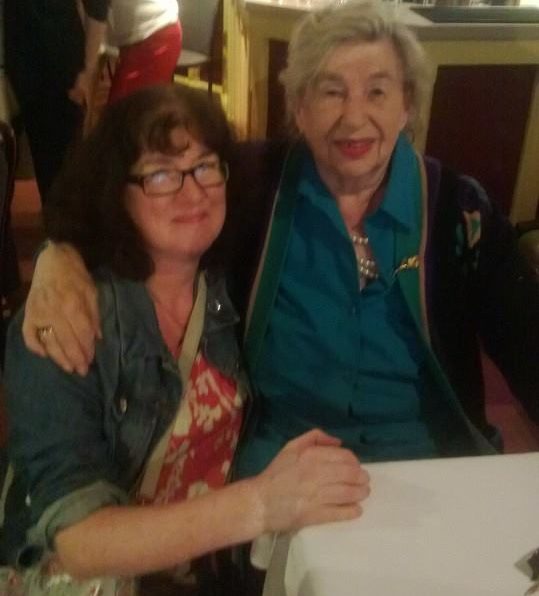 Walking past my local public library just before Christmas, I nearly fell over in delighted surprise when I spotted a big sign announcing an imminent personal appearance by one of my favourite living novelists, M C Beaton.

Although my nearest public library is in the middle of an old-fashioned  shopping centre, its managers are  up-to-the-minute on what makes modern readers tick. M C Beaton is the author of some of the most borrowed library books in the country (more details here). I’ve been hooked on her mystery  stories  ever since I heard a snippet of a radio dramatisation of the first Agatha Raisin book, Agatha Raisin and The Quiche of Death. I’ve now worked my way through all 23 books in the Agatha Raisin series, another 28 about Hamish Macbeth, and some of her others too. Always enormously prolific, at the age of 74 she still writes at least two books every year, an Agatha and a Hamish, for which her fans are truly grateful.

I immediately snapped up tickets for myself and her other fans in my family: my parents and my sister. We were all impatient for the day of her talk to arrive. After giving them a big build-up to the event, I became a little anxious. Would M C Beaton live up to our sky-high expectations? Supposing she wasn’t as fun, witty, warm and anarchic as her books? When I was a child, I met Michael Bond, creator of Paddington Bear  and Olga da Polga, and found him rather dull. There wasn’t a jar of marmalade nor a duffle coat in sight. (Apologies to Michael Bond, by the way – my disappointment reflects my childish grasp of authorship rather than his personality!)

Top Talk by A Master of Her Craft

Thankfully, Marion Chesney, to use her real name, was even more fun than I’d dared hope.  On the appointed evening in January, we battled through wind and rain to gather in the little local library. The room was buzzing with the chatter of eager fans, yet the minute she walked in, the room fell silent. She progressed  across the room, her Edwardian-style velvet gown billowing about her in a multitude of jewel-like colours. Beneath it shimmered a copper silk shirt. She knew how to create a dramatic entrance. Taking her seat on a plain library chair in the middle of the room, she picked up the microphone and with no more ado began to speak. Without reference to notes or slides, she took us through a highly entertaining account of her career, swiftly moving from bookshop assistant to reporter to theatre critic to novelist, holding the audience completely in her thrall.

It would be easy for a bestselling writer to use library events simply to sell their books. M C Beaton preferred to entertain. She also demonstrated herself to be as prolific a reader as she is a writer, just as all good writers ought to be. I was especially pleased to hear that one of her favourite authors was another of my literary heroes: Dorothy L Sayers, creator of Lord Peter Wimsey.

“I’ve even bought Fifty Shades of Gray,” she announced to our astonishment. “I bought it by mistake at an airport when I didn’t have my glasses on. I thought, ‘Oh, here’s a new P D James I haven’t read yet’.”

The Icing on the Cake

We were putty in her capable hands. Her self-deprecating tales served only to hold us deeper in her thrall. After the talk, not only was the queue to buy her books enormous; many people went back two or three times with further purchases.

Were we the unwitting victims of clever, cynical marketing tactics? Oh no, she was entirely genuine. How do I know? I asked her to sign a book for my author friend Sandy Osborne, whose own debut novel Girl Cop had been published the previous week. As she was autographing the frontispiece, I had a sudden, cheeky impulse to tell her about Girl Cop, and I offered to send her a free copy.

“Oh no, dear, give me the details and I’ll order it from Amazon,” she said with a winning smile. “I believe in writers getting their royalties.”

M C Beaton’s writing career has not all been plain sailing. She is still bitter at the way she was treated by the producers of the Hamish Macbeth television series many years ago. They took extraordinary liberties with her characters and plots, which bear  no resemblance to her creations. Scandalously, they don’t even pay her royalties for repeats. But is she downhearted?

“Oh no, I got my revenge,” she asserted. “My next Hamish Macbeth book was called Death of a Scriptwriter.”

Now that’s what I call a class act.

For more about M C Beaton, visit her website.

From my book promotion website, a report on talks by romantic novelist Sarah Duncan and performance poet John Hegley