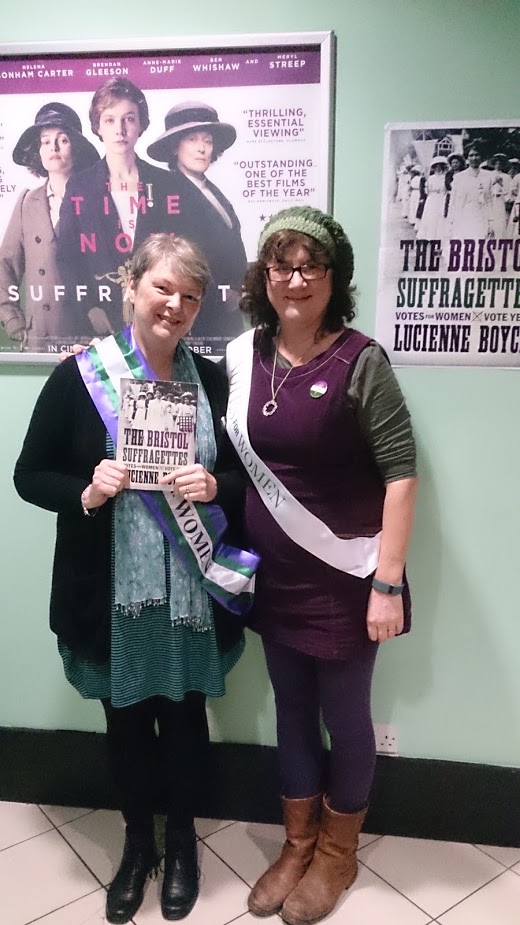 Though I’d wanted to see Suffragette for ages, I don’t usually get round to seeing films until they’re out on DVD, unless they’re children’s movies such as Minions, whose bright yellow and blue merchandise is everywhere just now.

This time I had an incentive to be quicker off the mark: my historian friend Lucienne Boyce, author of The Bristol Suffragettes, was to give a talk at the cinema before the film. In a show of support, and because I’m genuinely interested in the movement’s history, I donned an outfit in suffragette colours (green, purple and white) – though I drew the line at chaining myself to the cinema railings.

Not So Last Century

I invited my daughter (12) to join me, but she decided the film wasn’t relevant to her, because “We’ve had the vote for ages now, Mummy.” I was glad that she felt so secure in her equal rights, yet for me the British suffragette movement feels like recent history. My grandmother didn’t get the vote till she was 28. She was born in 1900, and in the UK, women only gained equal voting rights with men in 1928. While I was still at primary school, Grandma made me promise to use my vote and use it wisely. When I pressed her to tell me which party she voted for, she refused to say, citing the confidentiality of the ballot box.

The credits at the end of Suffragette include a list of the dates when women were granted the vote around the world. Though Britain lagged behind some countries, other nations made their women wait much longer, e.g. in Switzerland until 1971. Yes, 1971. Less surprisingly, Saudia Arabia’s women are still only on a promise, and even that’s just for local elections.

Even if, like my daughter, you think women’s suffrage is old news, the film relays many topical messages about standing up for what you believe in, about giving voice to the oppressed, and about how far you should go to fight for your rights.

Though unhappy about the way the film ended (I won’t spoil the plot in case you haven’t seen it yet), I left the cinema buzzing with enthusiasm and laden with promotional flyers, badges and stickers bearing authentic suffragette slogans such as “Find Your Voice” and “Deeds Not Words”. I was even given a sash proclaiming “Votes for Women”. Oh, I do love souvenirs!

When I took my booty home, I expected my daughter to nab the stickers to adorn her school history book, but she declined. Fortunately, I had another conscience present for her up my sleeve: a small golden heart-shaped badge, sold at the box office in aid of the Variety Club children’s charity. This she was very happy to accept. The reason? It featured a Minion. Of course.

2 thoughts on “Votes for Minions”