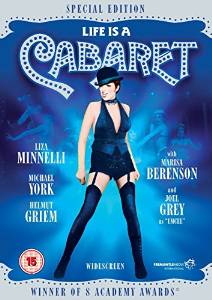 I don’t often join in games on Facebook, but when my friend Lisa tagged me to name seven favourite films on seven consecutive days, I couldn’t resist joining in what sounded like a cinematic equivalent to one of my favourite classic BBC Radio 4 programmes, Desert Island Discs.

Having thought hard about my choices, I’ve now brought them altogether in a single blog post to share them all in one place, and to see what my blog friends think of them. So, cue the Pearl and Dean music, grab a choc-ice and a Kia-Ora orange drink  and sit down in the nearest plush red tip-down seat, and see what you think… (Note to my non-British friends: these are classic overtures to enjoying a film at the cinema circa 1970!)

I’m kicking off tonight with “The Music Box”, starring Laurel and Hardy, which I first watched when I was a child with my grandfather, who would have been just 27 when this classic was released in 1932, and a love of this film must be in our genes, because it’s passed down from him to my father to me to my daughter Laura (12).

84 years since its release, it’s still fresh and witty and warm-hearted. If you’ve never seen it, watch it now, and marvel at how ahead of their time this masterful pair were. They’re Laura’s comedy heroes, and she couldn’t have picked a finer pair of role models.

Okay, it may be a bit naff and past it by now, after the craze for it when it first came out, but I have to admit, I do love Mamma Mia.

Firstly because I’ll watch anything with Meryl Streep or Colin Firth in, so to find both together is a bonus. Secondly because I love Greek islands, and the scenery and Greek extras bring back many happy memories. Thirdly because I know all the words to all the songs from when they first came out, and can belt them out word-perfect along with Meryl Streep and co for a bit of feel-good aerobic exercise. Fourth, because the nostalgic song Meryl Streep sings about her daughter growing up reduces me to tears every time and makes me realise how lucky I am to have a daughter of my own (and that I’m not alone in feeling guilty that I don’t spend enough time with my daughter doing all the things the model mother would do!) Fifth, because I do love a happy ending!

Tagged: my author friend Jenny Heap, keen to join in the fun!

A silly, funny, warm-hearted black and white movie that is now the stuff of legends, featuring three Hollywood megastars at the height of their powers – Jack Lemmon, Tony Curtis and Marilyn Monroe.

I first watched it as a student and was drawn in in so many ways – the period setting during American prohibition, much of it in gorgeous art deco Florida, the sublime comic timing of Curtis and Lemmon, the remarkable presence of Marilyn Monroe (I haven’t seen a lot of her films, but surely this is role she is born to play – simple, daffy, vulnerable and charming), the pacy plot, the daft storyline of mistaken identify leading to C & L posing as women to join a girls’ band, and the witty, timeless script.

If you’ve never seen it, you’re missing a treat. Another one I should introduce my 12-year-old daughter to soon, I think – an essential movie experience, by anyone’s standards, surely?

Tagged: my American chum Becky Brain, to give her a bit of Florida sunshine, just before two feet of snow was due to descend on her in Philadelphia!

The two leads, Humphrey Bogart and Katharine Hepburn deservedly won Oscars. Set during World War I in the Congo, a repressed female missionary is forced to flee invading Germans who kill her brother and destroy the village in which they’ve been working, and her unlikely knight in shining armour is the grubby, hard-drinking captain of a one-man vessel, the eponymous African Queen, who normally brings their supplies.

For most of the time this film is a two-hander (or three-hander if you count the boat,) and the chemistry and perfect timing between the two leads is a masterclass in acting. A delicious mix of action adventure, a lush yet perilous exotic setting and a gentle romance between two lonely people, this is a class must-see.

Tagged: my South African friend Karen Lotter – in South Africa rather than East Africa, where this was filmed, but I always think of her when it comes to African themes. Yes, I know it’s a big place…

Stanley Kubrick’s epic is a stunning evocation of 18th century England, based on Thackeray’s historical novel following the adventures of a charming, ruthless Irish rogue, played by the captivatingly beautiful Ryan O’Neal, as he does all he can to become rich and powerful. It is a lavish, technically groundbreaking producition, its drama underpinned by a gorgeous score, including a memorable reworking of the grand and ominous Sarabande by Handel.

Wonderful cast includes not only the big names noted on the IMDB credit in the link, but also the late great Leonard Rossiter in one of his serious roles, looking as if he stepped straight out of a period politic cartoon.

Tagged: my musical friend Pauline Setterfield, to share the joy of the soundtrack

This children’s film based on Brian Selznick’s lavishly illustrated novel “The Invention of Hugo Cabret” tells the adventure of a boy who secretly lives in a Paris railway station rather than risk being taken to an orphanage when his father dies in a museum fire. Asa Butterfield is an engaging young hero in a wonderful cast, but the true hero of this visually stunning film (directed by Martin Scorsese) is the film itself, and the adventure-within-the-adventure the birth and blossoming of the silent movie.

This is a must-see for anyone who loves film, and I defy you not to shed a tear in the final, triumphant section of the movie.

Tagged: my Francophile author pal Alison Morton, who was inspired to write her first novel after going to see a film and declaring “I could do better than that”. Then she did.

Saving the best for last, my all-time favourite film, Cabaret, directed by Bob Fosse. Set in 1930s Berlin, Brian, a middle-class young Englishman, played by the oh-so-British and beautiful Michael York, has his eyes opened to the world beyond university by the dubious delights of decadent, dangerous Berlin, led by the hand by American night-club chanteuse Sally Bowles (Liza Minelli) in the role that she was surely born to play.

The mischievous night club MC Joel Gray binds the story together leading the gritty, catchy songs (“Money Makes the World Go Around”, “Two Ladies”, etc)  that intersperse the action beyond the club.

Intricately bound up in Brian’s coming-of-age is Germany’s transformation, with the rise of the Nazis, kicked out of the Kit Kat Club early on in the film, but by the end a terrifying force. Their rise is told skilfully and subtly, e.g. the scene in the Beer Garden, where the young Hitler youth leads a spontaneous chorus of “Tomorrow Belongs to Me” – it sends shivers down my spine every time.

Though there is much actual and implied suffering in the film (we witness Kristallnacht, for example), with the promise of what is to follow in the form of World War II, the final note is one of strength and optimism in the face of adversity, and of the underlying humanity of us all. Based on Christopher Isherwood’s novel “Goodby to Berlin”.

Tagged: my travel- and music-loving friend in Florida, Shay Tressa DeSimone, because it often seems to me that for her, Life is a Cabaret!

(All photos from Amazon – click on the photos if you’re interested in buying the DVDs; click on the film title to see its entry on the IMDB database)

What do you think of my choices? Which films would be your top seven? I’d love to know!