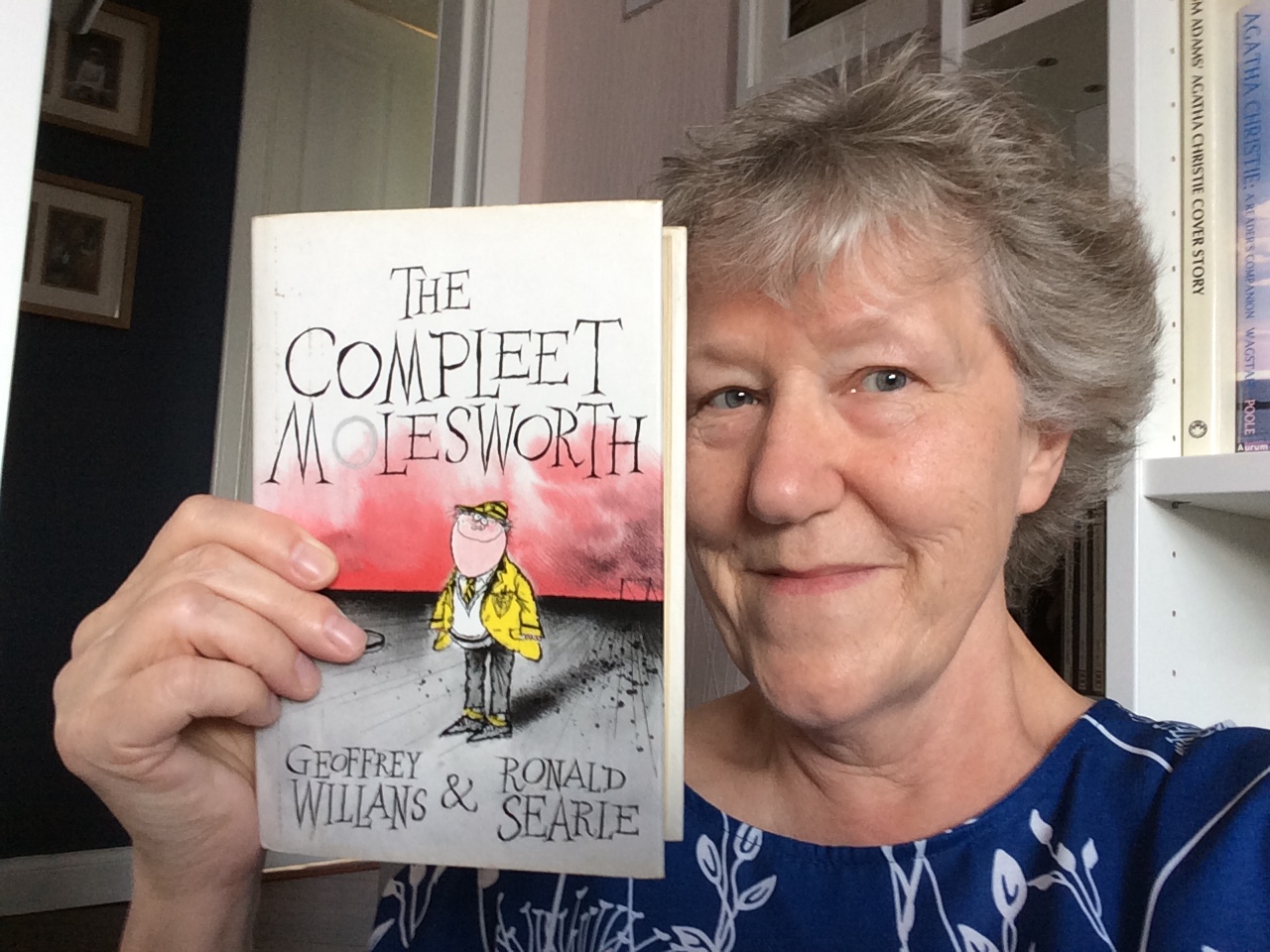 When I launched my St Bride’s series set in a British girls’ boarding school, I asked some author friends which school stories they’d most enjoyed when they were growing up and invited them to share their enthusiasm on my blog.

This month we’re staying in England for a series of school books that is quintessentially British, in the company of novelist Linda Gillard, author of nine novels, two of which became Kindle bestsellers. Linda will explain why she loves the Molesworth books by Geoffrey Willans and Ronald Searle, set in a classic boys’ private school, St Custard’s. (Searle also created the equivalent girls’ school, St Trinian’s.)

I needed no introduction to Molesworth. When I was a child, we had a well-thumbed hardback omnibus edition that all the family enjoyed, including my mother, a teacher, and my brother and sister, who both trained as teachers when they grew up. (I was never a teacher, but I did work in a boarding school for 13 years.) None of us had boarding school educations, but we still appreciated the witty satire about private school life, and I especially loved the anarchic use of language, full of quaint schoolboy slang, complete with painfully bad spelling which is an intrinsic part of the humour.

I first got to know Linda Gillard online about seven years ago and it was a couple of years before we were able to meet in person, because she lives hundreds of miles from the Cotswolds in Scotland. However we have managed to meet at two very appropriate places – Leakey’s wonderful secondhand bookshop in Inverness, and at Foyles’ flagship store in London.

Although Linda is English, and went to university not far from me in Bristol, many of Linda’s books are set in Scotland, and I particularly enjoyed Emotional Geology, set on the Scottish Isle of Skye, where I’ve often been with my Scottish husband.

(Leakey’s Bookshop and Skye will feature in the eighth Sophie Sayers novel, which I’m looking forward to writing – but first I must finish the seventh, Murder Lost and Found!)

Now, let’s find out why Linda has chosen Molesworth as her favourite school story.

Linda, welcome to my blog. I’m thrilled that you chose what for those of a certain age is a timeless classic. To kick off, please tell us a little more about it.

Thank you, Debbie for inviting me to talk about my favourite school book. It’s been delightful re-acquainting myself with the works of Nigel Molesworth, “the Curse of St Custard’s”.

The Compleet Molesworth, by Geoffrey Willans and Ronald Searle, comprises four short volumes of memoir crossed with self-help manual, written by the fictional Nigel Molesworth, a pupil at a second-rate English public school in the 1950s.

How old were you when you first read it, and how often and at what ages (approx) have you reread it?

I don’t remember exactly when I first read it, but I was a junior pupil at a strict, old-fashioned girls’ grammar school when I was lent a copy of How to be Topp by one of my posher friends who had a brother at public school. (State education was apparently good enough for girls in the 1960s.) I was probably about twelve or thirteen.

I’ve returned to Molesworth throughout my life, just to dip in and chuckle. I owned Puffin paperbacks of all four books (Down with Skool, How to be Topp, Whizz for Atomms and Back in the Jug Agane) and passed them grudgingly on to my children, then one day in a second-hand bookshop I came across a hardback omnibus edition. I pounced.

I shelve that with children’s fiction, but like the William Brown books of Richmal Crompton, Molesworth’s oeuvre was in fact intended for adults. His diary first appeared in Punch and generated so much fan mail, four books appeared in the 1950s.

How has your perception of the books changed with later readings?

When I first read them, my response was (as it has been to a great deal of literature, including poetry and Shakespeare) a mixture of awe, delight and only partial comprehension.

I had a sense of opening a window on to an absurd and hilarious world: not just the appalling prep school, St Custard’s, but a new world of anarchic language (Willans) and illustration (Searle).

The books have enriched my life, my children’s and my parents’. I can’t think of any other books that have been enjoyed by all three generations. My respect for Molesworth has grown over the decades. He still makes me laugh.

Every page is laugh-out-loud funny. You only have to mention The Molesworth Self-Adjusting Thank-You Letter or The Molesworth Bogus Report to aficionados and they will start to smile. (Whenever I trimmed his hair, my father would quote a line from Matron’s Report: “We forgot to pack his combs. Simply couldn’t face it.”.)

The genius of the book is the perfect pairing of Geoffrey Willans’ economic text with Ronald Searle’s baroque illustrations. Searle is quite rightly credited as co-author, rather than  illustrator. The text would be nothing without the illustrations, but equally the deadpan text points up the grotesque humour of the illustrations. “Distance back to pavilion is now 120000 miles” is the caption underneath a picture of a seething, bowled-out Molesworth in the “Criket” section.

Nigel Molesworth, the rebellious anti-hero. I had a younger sister, two forms below me, so I understood the long-suffering tolerance of his annoying sibling, known as Molesworth 2. (“He do not share the charm and good looks of his elder bro, molesworth 1, hem hem. Strange that they could be related.”)

I don’t think the books influenced me particularly, though they might have made me more tolerant of the Latin I had to study as far as O Level. Like Molesworth, I didn’t see any point in learning Latin. (I do now.) The books were just joyous entertainment, something I shared with my friends and family. I would feel an instant kinship now with anyone who said they’d read and loved them. They confer the camaraderie of the old school tie.

Nigel Molesworth’s total disregard for grammar, spelling and political correctness had no effect on my writing, fortunately.

I attended a girls’ grammar school in the 1960s. We weren’t allowed to talk to boys outside school, not even pupils at the Boys’ Grammar School across the road (of which Mick Jagger was a recent ex-pupil). We wore unflattering felt hats in winter and equally unflattering straw hats in summer, of a design that made even pretty girls look dowdy.  It was detention if you were caught turning your hat brim up.

The uniform was a horrible bottle green and we had to wear two pairs of knickers: white next to our skin and bottle green over the top of those. We were subjected to occasional spot checks to make sure we were wearing both pairs.

A friend introduced me to Molesworth. In turn I showed the books to my sister (Gillard 2) and eventually our parents, who probably recognised in Molesworth a natural successor to Spike Milligan and the Goons.

We all became fans and Molesworthian expressions crept into our everyday speech. As any fule kno, I have given it to the poor boys, Hullo clouds hullo sky and I diskard him were favourites. The fact that I was able to share the books in this way  with friends and family was half the joy. It gave us a common frame of reference, a shared, quirky language. Right up until their deaths, my parents would still quote Molesworth, smiling:

Searle’s illustrations are timeless and will be eternally hilarious, but Willans’ text is problematic. I doubt whether the books would appeal to young readers. Few children learn Latin now and there are a lot of jokes about the teaching of Latin. Most young people don’t regard correct spelling, grammar and punctuation as important, so I’m not sure they’d see the joke of Nigel’s cavalier literary style.

The books are also very much of their time. Corporal punishment is not a laughing matter now, nor are defective teaching or parenting. A public school education is no longer something to be envied or admired and the ridicule of wealthy, white, male privilege hardly seems subversive.

However, the popularity of the recent dramatisation of Enid Blyton’s Malory Towers books made me wonder whether Molesworth could still be enjoyed as a quirky period piece by teenagers. You certainly don’t have to attend public school to enjoy Molesworth, but I do wonder if Willans’ wit would travel down the decades for those who enjoy a modern and enlightened education. “Caesar had some jam for tea” depends on familiarity with “Caesar adsum iam forte”. The books might now be dismissed as élitist, as Blyton’s are. Ironically the intention was to ridicule an élite and celebrate the indomitable and ingenious spirit of the British underdog.

Thank you, Linda, it has been a joy to hear about your passion for the immortal Molesworth.

A birth. A death. Hidden for a hundred years.

In 1917 a sense of duty and a desire for a child lead celebrated artist Esme Howard to share her life and home – 16th-century Myddleton Mote – with Captain Guy Carlyle, an officer whose face and body have been ravaged by war. But Esme knows nothing of the ugliness that lurks within Guy’s tortured mind, as he re-lives the horrors of the trenches. As a child grows within her, Esme fears Guy’s wrath will be turned on them both. A prisoner in her own home, she paints like one possessed, trusting that one day someone will hear her silent cries for help.

A century later, Miranda Norton inherits Myddleton Mote and its art collection from a father she never knew and decides to move on after the end of an unhappy marriage. Inviting her extended family to join her, Miranda sets about restoring the house and turning it into a thriving business. When someone from Miranda’s past returns to torment her, an appalling act of vandalism reveals the Mote’s dark secrets, hidden for a hundred years.

For more information about Linda Gillard, her books and her writing life, visit her website at www.lindagillard.co.uk.