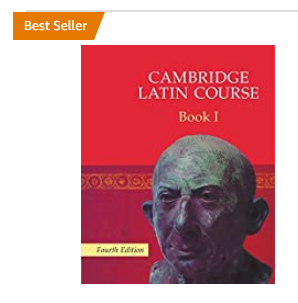 In my column for the December issue of the Hawkesbury Parish News, I shared the new discovery that’s helping me to learn Latin: Duolingo

For a couple of years at secondary school, I studied Latin using what was then considered a revolutionary new system.

The Cambridge Latin Course tried hard to make learning fun and Latin funky. The first year’s course book had a bright orange cover – very right-on in the 1970s, when I chose to paint my bedroom walls bright orange too.

The course revolved around the story of a real-life family, headed by Lucus Caecilius Iucundus, a rich banker, living in Pompeii just before the devastating eruption of Vesuvius.

Call me suggestible, but Lucus Caecilius Iucundus and his family came to seem very real to me, and I cared about them.

When I changed schools at the age of 14, to my regret Latin was no longer an option.

Now, decades later, I’m making up for lost time with a very 21st century route to fluency: a free app called Duolingo. With an estimated three million users globally, Duolingo aims to please its students wherever they are in the world.  Thus I find myself translating surreal conversations featuring New York, Philadelphia, Boston and California, none of which existed when Latin was a living language.

Having always wondered what happened to Caecilius and family, I decided to investigate. To my surprise, our experimental texts have since become a classic teaching method, celebrating 50 years in print. The particular book I used, albeit now published with a less startling coloured cover, is currently Amazon’s #1 bestseller in Latin.

Even more surprising is that Caecilius and family have since featured in an episode of Dr Who, which my daughter kindly found me on Netflix. Their adventure opens just as Vesuvius is making ominous noises, portentous of imminent eruption and mass destruction. What becomes of my chum Caecilius? You’ll have to watch it to find out. (Here’s the link to its IMDB page: https://www.imdb.com/title/tt1173173/)

But I have one remaining question: had I had been able to persevere with my Latin studies, would Dr Who have popped up in the A Level textbook? Now that would have made Latin cool.

PS Added Duolingo fun can be found on this alternative Twitter account: @shitsduosays, which highlights the more bizarre and surreal phrases it teaches you. Here are a few screenshots to whet your appetite: