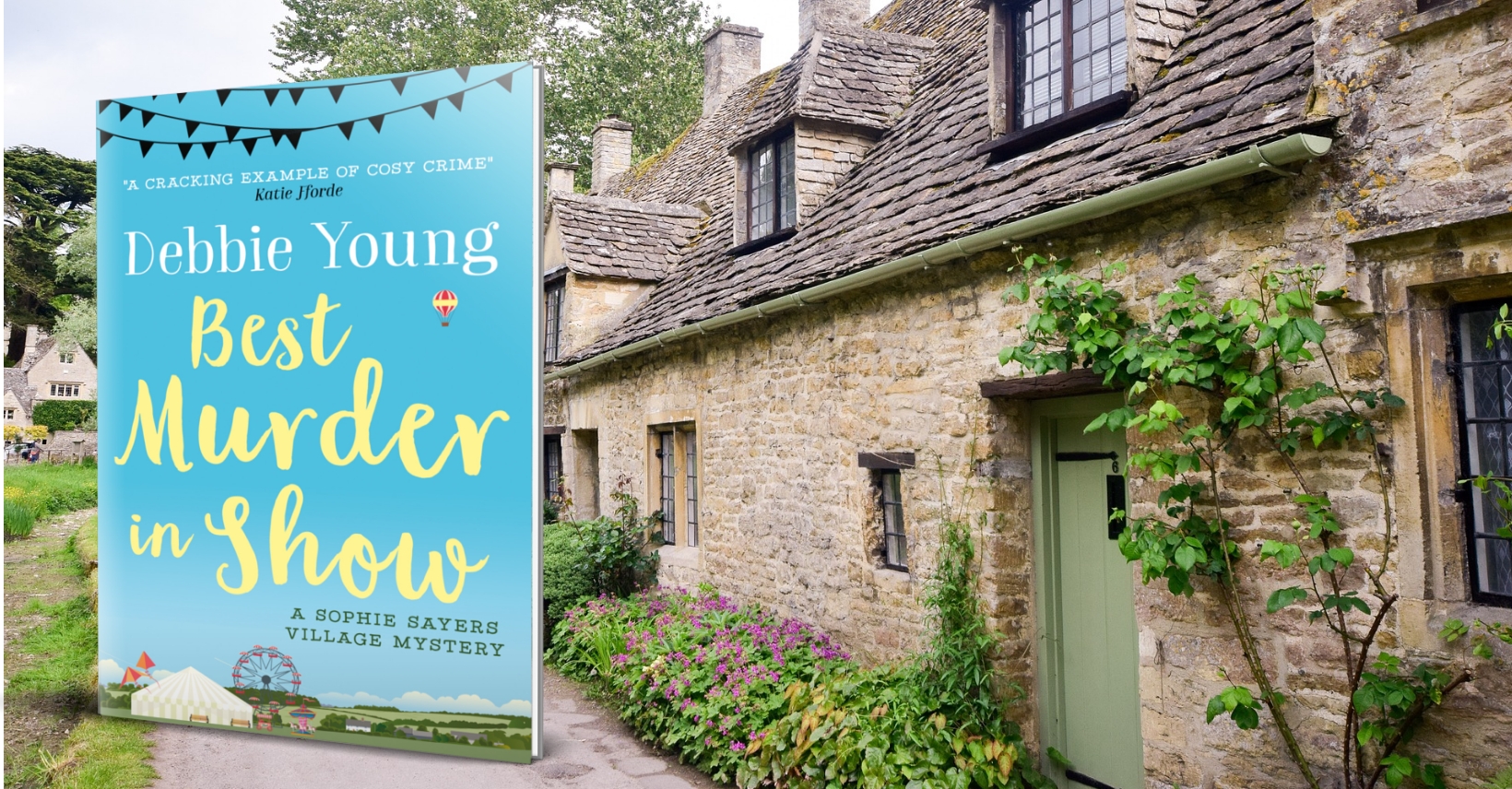 Perhaps because I write in the first person and I live in a village in the Cotswolds, readers sometimes assume that my Sophie Sayers Village Mysteries are partly autobiographical. One of my best friends, who has known me since we were 11, said to me after reading the first in the series, Best Murder in Show, “Sophie Sayers – she’s you, isn’t she?” Today I’d like to explain some of the similarities and differences between us.

First of all there is a disparity in our ages. I’m old enough to be Sophie’s mother, but I was only four years older than Sophie when I moved to the Cotswold cottage where I still live and work today.

Like Sophie, I had previously lived in towns and cities before moving to a village, but I moved here with my husband rather than as a single girl on the rebound from a failed relationship.

Sophie and I are both lucky enough to live in a Victorian Cotswold stone cottage with a pleasant established garden, but Sophie inherited hers. I had to buy mine, paying off my mortgage a few years ago. I envy Sophie her mortgage-free status from such a young age!

Strangely, when I write about Sophie’s cottage, I don’t picture my current home. That might seem the obvious choice, but it’s the wrong size and shape for my story. Mine is a three-bedroomed semi-detached cottage, whereas Sophie’s is a two-bedroomed terrace. (That’s a row house to American-English speaking readers.)

For the internal layout, I picture an amalgam of my maternal grandmother’s 1920s terraced house in Sidcup and my first house, a Victorian two-up, two-down workman’s villa in Tring, Hertfordshire. Both of those houses were brick-built, but Sophie’s is definitely made from the local honey-coloured Cotswold stone, like all the other old houses in her village.

Sophie and I both harboured writing ambitions since childhood. Like Sophie, when I decided the time was right to start taking my writing seriously, I took baby steps rather than plunging straight into writing novels. Having swapped my full-time job for a part-time one to give myself time to write, I committed, as Sophie does, to writing a monthly column in the village community magazine, in my case the Hawkesbury Parish News. This was to force myself into a regular writing habit and to nurture the discipline of writing to deadline and to length.

Unlike Sophie, I volunteered to write a second column for a magazine with a larger readership and circulation, the award-winning Tetbury Advertiser, which serves the nearby Cotswold market town.

For both publications, I write about seasonal or topical issues, and they’re generally humorous, ending with a smile even when addressing a serious issue such as Covid-19, but the editors give me free rein as to choice of topic.

Sophie, on the other hand, confines herself initially to writing for Wendlebury Barrow’s parish magazine, in which her column is called “Travels with my Aunt’s Garden“. The great aunt from whom she inherited her cottage was a travel writer and filled her cottage garden with plants that remind her of her favourite places around the world. Each month Sophie writes a seasonal piece about a plant currently thriving in her garden and its exotic origins.

There are many differences between us:

Writers’ Retreat as a Turning Point

But there is one final similarity that unites us:  we have both attended writers’ retreats on Greek islands. Mine was on Ithaca, run by author, designer, poet and musician Jessica Bell, an Australian living in Athens. Sophie’s is on a tiny fictitious island just off the end of Ithaca and is run by a specialist company based in London.

Sophie wins her place on her retreat as a competition prize, whereas I attended Jessica’s as a paid speaker.

Yet both Sophie and I returned from our retreats significantly changed.

For me, the retreat was the turning point that made me realise that I really could write novels. Previously I’d focused on short stories, nervous of tackling the larger canvas of full-length fiction. My eighth novel, Stranger at St Bride’s, is due to launch on 1st July.

Sophie enters her retreat questioning not only her ambition to write books, but also the future of her relationship with Hector.

How is Sophie changed by her retreat? You’ll have to read Murder Your Darlings to find out!

How to Order Murder Your Darlings

How to Create Your Own Writing Retreat at Home

While the coronavirus pandemic hampers foreign travel, writers’ retreats abroad can be only a fantasy. That’s a great shame, because writing is terrific therapy in a time of crisis, even if you write only for yourself.

My friend Lorna Fergusson, an award-winning author, writing coach and editor, has set up this course online at a very reasonable price ($17 earlybird rate until 21st June, $37 after that). This gives you a lifetime access to the course materials.

Lorna also runs free online writing retreat sessions, and having enjoyed a couple of those during lockdown, I know that her course will be of a high standard (and yes, I have already snapped one up at the earlybird rate!) Click here for more information.

2 thoughts on “Sophie Sayers and Me”