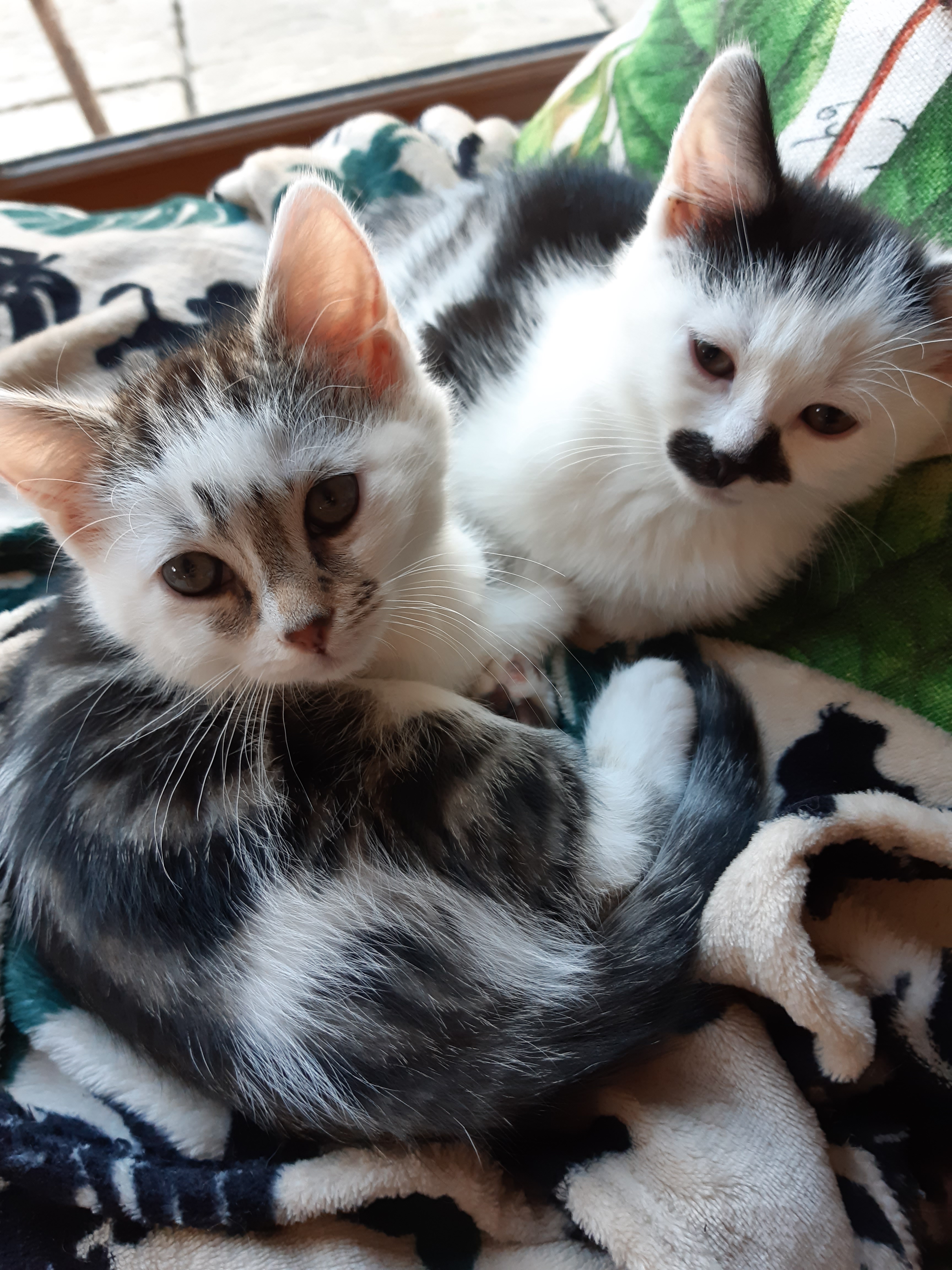 During the early part of lockdown, the Tetbury Advertiser furloughed itself for a couple of issues (May and June). With content that is events-led, reporting on recent events and anticipating imminent ones, it seemed a sensible step. However, it’s good to see it return for its summer issue (a joint July/August edition, for which I wrote this piece about our new kittens, acquired just before we began to self-isolate. As ever, you can read the whole issue online – here’s the link for the July/August edition.

(I also wrote about kittens for the June issue of the Hawkesbury Parish News, and I posted that article on my blog here last month- so apologies if this sounds familiar!)

There’s nothing like the acquisition of kittens to lift the spirits, and ours couldn’t have arrived at a better time.

We arranged in February with the Stroud Cats’ Protection League to adopt a pair of boys as soon as they were old enough to leave their mother. This took us to Saturday 21st March, a pleasingly auspicious date on two counts: the first day of spring and my parents’ anniversary (67 years and counting).

Back in February, little did we know that collecting the kittens from the kindly foster-carer would be our last family outing before lockdown. Ever the optimist, I soon realised that enforced confinement at home would give us the best chance of bonding with our new arrivals, especially for our daughter, who would otherwise have been at school all day.

Once home, inspecting the adoption papers revealed another good omen: the kittens had been born on my birthday. This happened also to be the date our senior cat, Dorothy, a former stray, adopted us seven years ago. We called her Dorothy after the character in the Wizard of Oz who finds herself unexpectedly far from home. We named Bertie and Bingo, both boys, after the skittish, privileged and generally irresponsible young men in PG Wodehouse’s Jeeves stories.

Bertie and Bingo, after spending the first nine weeks of their lives in a pen (albeit an ample one), were initially content to keep to one room in our house. Since my husband built his room a couple of years ago, we had, with a singular lack of imagination, referred to it simply as “the extension”. Now I think of it as The Drones’ Club, which is where Bertie Wooster and chums take their meals in the Jeeves novels, often leaving chaos in their wake.

Advised to keep the kittens indoors for a couple of weeks, we eventually let them into our enclosed garden. We kept them on tiny harnesses to slow them down until they’d got their bearings. Bertie and Bingo do everything at high speed, unlike our senior cat, Dorothy, who lopes around languidly like the Pink Panther.

After a few days we allowed them to roam at will, gradually expanding their territory and surprising us with their feats of athleticism. They share a talent for scaling vertical walls with the power and grace of Spiderman. Bingo has proven a dab paw at swingball, which he sees as a scaled-up version of their scratching post, which happens to be topped by a ball on a string. Bertie prefers the trampoline, climbing to the top of the netting surround with ease.

It’s only when one of the kittens tries to squeeze into the cardboard box that used to be big enough for both of them that we realise how much they have grown. I haven’t yet dared step on the bathroom scales to see whether lockdown has had the same effect on me.

(The next issue of the Tetbury Advertiser will be out in September, as they also publish a double issue for July/August.)

Cats and Kittens in my Stories…

As a cat lover, it’s perhaps inevitable that cats and kittens feature in my novels, often serving to move the plot along and adding new dimensions to the characters.

In Springtime for Murder, the fifth Sophie Sayers Village Mystery, Sophie acquires a kitten, while investigating the strange goings-on at the Manor House, where Bunny Carter, a sparky elderly lady, lives with a houseful of cats and her cat-averse daughter.
(Buying links: buy the ebook online here, buy the paperback online here, or order from your local bookshop quoting ISBN  978-1911223344.)

In Stranger at St Bride’s, the first in my St Bride’s School series, McPhee, the headmistress’s cat and constant companion, joins forces with Gemma to try to drive away the unwelcome stranger, with comical results.
(Buying links: Buy the ebook online, buy the paperback online  or order from your local bookshop quoting ISBN 979 19 11 223 597.)

(I’ve just realised that in both cases the cats are black – I suppose that’s what comes of writing mystery stories!)