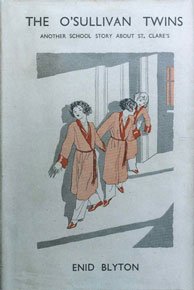 When I launched my St Bride’s series set in a British girls’ boarding school, I asked some author friends which school stories they’d most enjoyed when they were growing up and invited them to share their enthusiasm on my blog.

This month we’re heading to the other side of the world to talk to Tasmanian author Madeleine D’Este about her love of Enid Blyton’s The O’Sullivan Twins.

I first got to know Madeleine last year when she kindly invited me to be a guest on her lively podcast series. It was great fun to speak to her online in Melbourne, Australia, at opposite ends of our day, thanks to the twelve-hour time difference! You can hear our conversation on her podcast site here.

Madeleine is the first guest in this series to choose an Enid Blyton classic – which has surprised me, as when I mention school stories, most people immediately think of Enid Blyton.

(However I do have another post lined up for later in the year in which Malory Towers will be the guest’s choice.)

Madeleine also writes school stories herself, aimed at teenagers and young adults. Her latest novel, The Flower and the Sword, nominated for a prestigious Australian Shadow Award last year, is a horror story set around a high school production of Macbeth. What a great idea, especially as in the UK at least “the Scottish play” is on the syllabus for the GCSE public exams!

Now, let’s find out why Madeleine so loves The O’Sullivan Twins…

Madeleine, welcome to my blog! To kick off, for the sake of those unfamiliar with your favourite school story, can you please tell us a little about it?

Pat and Isabel O’Sullivan are back for another term at St Clare’s and this term the twins are determined to buckle down and do well.

But the new term brings new faces to St Clare’s, including their vain cousin Alison, the pretty Lucy and the sullen Margery who seems determined not to make any friends.

There are blow-ups and pranks and midnight feasts to distract the twins from their school work, but when a fire threatens St Clare’s, which of the girls will turn out to be the real heroine?

How old were you when you first read it, and how often have you reread it since?

I devoured all the St Clare’s books when I was around eight years old in the early 1980s. I re-read The O’Sullivan Twins about five years ago and now again in 2020.

When I read The O’Sullivan Twins about five years ago, I was struck by how the key theme of the book seemed to be the need to conform. Through peer pressure, the twins and their friends ostracise and basically bully those girls who don’t fit in.

Now as an adult, I understand the historical context and that the book was written in the midst of World War II when diverting from the norm had real consequences, but the undercurrent of bullying tarnished my pristine innocent memories of the book.

But… re-reading again in 2020, I saw another side to the story. While there’s no denying the peer pressure to conform, this time I also noticed how each “outsider” character is given an opportunity to explain why they are behaving in a certain way.

The O’Sullivan Twins highlights that the non-conforming characters have various, and perfectly valid, reasons for their behaviour, they each have their own issues and traumas which the other girls may know nothing about. For example, Margery feels abandoned by her father and Mam’zelle (the French teacher) is thorny because she is worried about her sick sister. Everyone should be given the benefit of the doubt.

Who knew Enid Blyton was so layered?

What did you particularly like about this book and about the author? Anything you disliked?

I was obsessed by boarding school books and desperately wanted to go to a boarding school myself. I think I was drawn to the fun and friendship and the food. The rituals of the schools were exotic and enticing to me, the midnight feasts, the trips to town in twos and I always wondered what ‘prep’ was.

In retrospect, the way the girls are described physically was irritating. A girl who is pretty is generally good while an ugly or “unattractive” girl or woman is something to be pitied or distrusted. Sigh.

I was fascinated by the “sneak” character, Erica, the villain of the story – the girl who went behind everyone’s backs to spoil their fun. Her motivation intrigued me and how she continued to cause trouble even though she didn’t seem benefit or gain any status from her mean tricks.

I often wonder why people act this way in real life. What are they gaining from it?

I never went to boarding school, although I did play lacrosse (very badly) in high school, but I became obsessed with creating my own school rolls. I would take out an atlas and a book of baby names and create a list of names of the girls in my class along with their home towns (I was also influenced by The Chalet School books and so every hometown was very exotic).

My mother still thinks it was very strange but now I understand I was creating character lists!

Three words: sizzling fat sausages. Enid Blyton gave me a love for sumptuous and evocative food descriptions which I still love to write (and read) today, and I continue to write feisty female characters.

I attended Australian state schools in Canberra, Launceston and Hobart.

Were your friends also fans, or did you feel that this was your own private world to escape into?

Reading has always been my private world, my little retreat from everyone and everything. And it still is.

My favourite time of the day is when I turn off all the devices and start to wind down by reading a good book with a big mug of herbal tea.

Young readers would find The O’Sullivan Twins very old fashioned, I imagine. The distinct lack of technology would make St Clare’s an alien world. However, if a young reader could overlook the “olden days” setting, I believe the themes of conformity, friendship and compassion would remain constant.

And of course, the truisms of growing up and blossoming into your own person never goes out of fashion.

Thank  you so much, Madeleine D’Este, for this entertaining and insightful analysis of The O’Sullivan Twins – and best of luck with your own school stories, as well as your series for adult readers.

To find out more about Madeleine D’Este, her books and her podcast, visit her website:

Now Over to St Bride’s…

If our conversation has whetted your appetite for a more contemporary take on school stories for grown-ups, now’s a good time to try my St Bride’s School series:

5 thoughts on “My Favourite School Stories: The O’Sullivan Twins – with Madeleine D’Este”