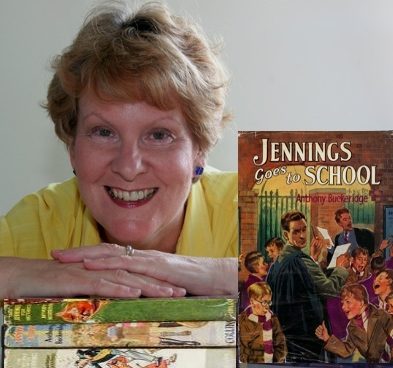 In this last of my series about favourite school stories, which I launched to celebrate the publication of my own school series for grown-ups, Staffroom at St Bride’s, I’m delighted to welcome thriller writer Alison Morton to talk about her choice: the Jennings series by Antony Buckeridge. These hilarious books were my personal favourite when I was growing up, although they seemed dated even then.

Set in a traditional English boys’ boarding school, and written by a former prep school teacher, the series revolves around the spirited, well-intentioned Jennings and his cautious best friend Darbishire. What I liked most about it was the humour, and it came as no surprise to me to learn recently that one of Buckeridge’s writing heroes was P G Wodehouse. (One of mine, too!)

I especially adored the language, peppered with posh schoolboy slang that I’d never come across in real life – a “wizard wheeze” for a good idea, and so on. (More on that in a moment from Alison.) But I could never use those terms in conversation, as only fellow Jennings fans might understand them. Which is why I was especially pleased to hear that Alison Morton was on the same wavelength.

Over to Alison now to tell us more…

Please give title, author and a brief description of the book.

It’s (John Christopher Timothy) Jennings’s first term at Linbury Court prep school. He befriends clever, but socially inept vicar’s son Darbishire, foxes into town in disguise, accidentally kicks the Archbeako (headmaster) on the kneecap while practising his football-skills, displays too much (or not enough) initiative during fire practice, and has a hair-raising incident with a poisonous spider. The expression ‘getting into scrapes’ must have been invented for Jennings, but he has such a genuine sense of honour it’s hard to be cross with him!

Ha! I think I was eleven, as I remember borrowing it from the library in my new school when I was in the Lower Thirds (equivalent of Year 7 today). I re-read it recently, and let’s say it’s several decades on from when I was first enthralled by Jennings and Darbishire.

I was surprised to find myself still chuckling. Either author Anthony Buckeridge was a very clever man or I still have an infantile sense of humour. Actually, I probably laugh at different places today. And although Jennings is impetuous and sees the world in a very specific way, I still find him endearing and, in his own way, logical. I probably don’t find him as exciting as eleven-year-old me did as I have done more exciting things during my own life!

The humour (and there is plenty of it) rests on misunderstandings resulting from Jennings’s literal-mindedness and impetuosity. In the earliest novels in the series there are some Latin puns; these were often omitted from later reprints which is a pity, but times changed from the 1950s and few children now learn Latin. Comradeship, behaving fairly and a desire to ‘do the right thing’, even though the school staff might not agree with the boys’ view of what that right thing was, runs through the books.

The earlier novels including Jennings Goes to School present an idealised version of small town, middle-class English life in the 1950s and mid-1960s which is the period I went to school in Tunbridge Wells, so a lot of the environment was what I considered ‘normal’.

But for me, who loved playing with words, spoke passable French and was learning Latin, the coolest thing (although we didn’t say cool then) was the invented language.

Post-war slang ‘wizard’ generally meant ‘good’ or ‘very good’. ‘Ozard’ that the boys use derives from ‘Wizard of Oz’ and was used to describe anything the boys disliked or dreaded.

It was also used to describe the anger of Mr Wilkins, Jennings’ form master, which could be ‘ozard’. ‘Ozard squared’ and occasionally ‘ozard cubed’ implied the direst of occurrences!

I have to confess that we still use ‘bish’ in our family to describe a mistake and will often ‘square’ or ‘cube’ something that’s very unfortunate.

It has to be Jennings, but I do sympathise with Darbishire on occasion. As an adult, I can sympathise with ‘Old Wilkie’ being completely unsuitable in temperament to deal with a class of bright, lively little demons.

Even though it was written about boys, this and the other Jennings stories were set in a children’s world where exciting things happened. I was extremely fortunate to be brought up by a mother who was determined to treat her son and daughter equally and my father agreed. I couldn’t see why girls and boys shouldn’t have the same adventures.

Jennings’ world was one I could escape to when my school had been particularly insistent on me behaving like a young lady rather than just a child.

Hm, interesting question. Perhaps it gave me a wish to read books only with snappy dialogue and a succinct style and plenty of action. And as we write what we would like to read, I hope I have passed this partiality onto the readers of my Roma Nova series.

In that equally imaginary world, my first heroine Aurelia’s child is home-schooled in the 1960s with a tutor although she did attend a private girls’ school in London when Aurelia was posted there. In her early days, Carina, my second heroine, and still Karen went to the local state school in rural America. Her children in Roma Nova went to school in the 2010s after initial nursery education at home.

A Church of England primary school which actually had an unofficial admissions policy. My mother, a teacher herself, had sussed this out and revealed this to me years later. It had an 80% pass rate of the 11 Plus (the national school exam that determined what kind of senior school you went to) and highest entry into grammar school in the area. Talk about hothouse! We didn’t know anything about that – it was just school.

I went on to one of the local grammar schools – Tunbridge Wells County Grammar School for Girls (as it was called then.) Famous alumnae include comedian Jo Brand and tennis player Virginia Wade. It was at TWCGS that thanks to Latin classes I discovered the rude poetry of Catullus, a book of which I actually gave to Carina, the heroine of Inceptio, my first Roma Nova novel!

Oh no, Jennings was definitely my private world!

I think so. Anthony Buckeridge was still writing the stories in 1994, although he changed some of the content with the times while keeping the basic concept intact. The themes of interacting with others in your group, acting equitably, trying to make your way through the bewildering business of school and growing-up are universal even though expressed differently today. My son went to a local prep school for a while in the 1990s before transferring to grammar school, and there were definitely some resemblances to Jennings’ Linbury Court!

It was a (surprising) pleasure to re-read Jennings and thank you, Debbie, for nudging me to rediscover that world.

Thank you, Alison, for sharing your passion for the Jennings school stories. I hope our shared enthusiasm will encourage more 21st century readers to discover his joyous world.

After tearing round Europe clambering over Roman ruins, serving six years in uniform and collecting an MA in History on the way, Alison settled down to write the award-winning Roma Nova alternative history thriller series of nine books. Her first psychological thriller, Double Identity, will be published on 7th January 2021 and is now available to pre-order here.

Connect with Alison on her Roma Nova site: https://alison-morton.com

“It’s about blood, survival and money. Mostly yours.”

New Yorker Karen Brown is running for her life. She makes a snap decision to flee to Roma Nova – her dead mother’s homeland, and last remnant of the Roman Empire in the 21st century. But can Karen tough it out in such an alien culture? And with a crazy killer determined to terminate her?

That’s all from my Favourite School Stories series for 2020. Next year, I’ll be introducing a new monthly guest post series to my blog: Travels with my Books, exploring books set in other countries and times.

4 thoughts on “My Favourite School Story: The Adventures of Jennings – with Alison Morton”