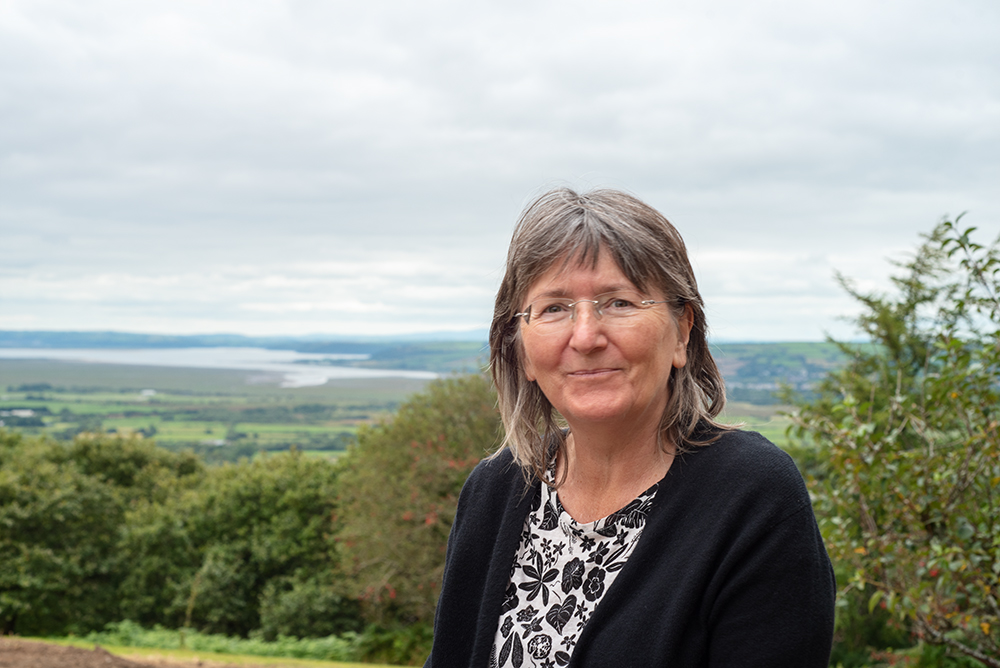 I’m delighted to welcome my prolific and versatile author friend, Jean Gill. Although she now lives in France, Jean is going to whisk us off to her adopted homeland of Wales.

Jean, living within sight of Wales myself, visibly on a clear day from my part of the Cotswolds, I know exactly where it is, but please tell us a little more about it as a setting for some of your books.

In 1154, the medieval Welsh kingdom of Deheubarth was reduced by the Normans to a tiny part of what is now Carmarthenshire. Then Rhys Gryffydd, came to power and began the fight to reclaim his grandfather’s realm. Think ‘Uhtred, son of Uhtred’ in Bernard Cornwell’s The Last Kingdom and you’ll have some understanding of Lord Rhys.

Which of your many books have you set there?

Song Hereafter is the last book in The Troubadours Quartet – ‘like Game of Thrones with real history’.

My fictional French troubadour characters travel through twelfth century France, northern Spain and the Holy Land. I had no idea when their adventures began in Narbonne that they would end up in my homeland, Wales. Perhaps it was inevitable as I still love Wales, even after twenty years living in France and time and again I am drawn to both countries as settings.

I’ve published twenty-five books now, since my first poetry book in 1988, and eight of them are set all or partly in south Wales. The Love Heals duo, second chance love stories in a rural setting, are set in both Wales and France.

When I lived in Wales I wrote about France and now I live in France, I write about both countries.

What makes Wales such a great setting for your stories?

1154 was an exciting year in both Welsh and English history, and my troubadours, Dragonetz and Estela, are caught up in the intrigues of Eleanor of Aquitaine as her husband, Henri of Anjou, manoeuvres to become King of England. Who will the Welsh support?

To find out, the troubadours seek out the rulers of south Wales. They find a land and people of savage beauty and pagan customs, engaging in guerrilla warfare against the Norman barons.

What challenges do your characters face dealing with the local people?

Even in medieval times, Welsh sophistication in verse and song has much to teach the French troubadours. Dragonetz is an ex-crusader, accustomed to battle, but he has never seen archers as skilled as the southern Welshmen – nor armed bands as undisciplined.

The contrast between ‘civilised’ southern and ‘barbaric’ northern Europe creates the conflict at the heart of the story and was a dramatic way for me to show dangerous misunderstandings.

Estela had gained a reputation as a troubadour, graced the courts of queens, been rewarded for her performances with wealth and respect. As a woman in a Welsh military camp, she is once again a nobody, protected only by Dragonetz’ status.

Modern Wales is still mostly rural and the wild landscape hasn’t changed, with prehistoric stone circles, lethal marshes, sandy beaches and mud estuaries. And of course castles, stone reminders of tensions with neighbouring England that have still exist today. I love this land as an insider and even the ugliest industrial town in which I’ve ever worked, Port Talbot, has character, and features in my books (the Looking for Normal teen books).

What is your relationship with Wales and how much of your life have you spent there?

I moved to Wales when I was 22 and lived there for twenty-five years. I had a nomadic childhood so that was the longest I lived anywhere. So I adopted Wales as my home country.

You mentioned Welsh castles. Do you have a favourite?

I love them all! When I bred Birman cats, my prefix was ‘Drwslywyn’ so all my cats began with the name of a Welsh castle, also the name of my first house.

The ones that feature in Song Hereafter are Llansteffan, Carmarthen, Tenby and Kidwelly. I’ve just revisited Kidwelly, one of my special places. Lord Rhys’ mother was Gwenllian, the Warrior Princess (isn’t THAT a title and a half!). Rhys’ father had taken Kidwelly castle and Gwenllian was defending it while her husband was in North Wales when news came of an attack by the Norman, Maurice de Londres. She led her army to meet him, was betrayed, defeated and beheaded on the battlefield – unheard of as a punishment for any woman, let alone one nobly born. Rhys was only about four at the time, so he grew up with his mother’s legend to live up to. You’ll still see mention of Gwenllian all around Kidwelly and of course her ghost haunts the castle.

Rhys’ ambition was to build his own castle, better than the Norman castles built by the marcher barons along the southern Welsh coast to keep natives like Rhys in order. I love the fact that he did it! He built Dinefwr Castle, near Llandeilo, in the late twelfth century, later than my story is set or I would be in residence permanently.

What are your top tips for any readers planning to travel to Wales?

Take every waterproof item you possess, definitely an umbrella and plenty of rainy-day books to read. Then you can be sure of unbroken sunshine and the impression that nowhere is more beautiful than Wales. Which is true. If it’s not pouring with rain.

Are there any other authors’ books set in Wales that you’d like to recommend?

Wales is the perfect setting for fantasy!

I’ve just finished a fantasy trilogy, Natural Forces, set in the sterile Citadel and the vibrant Forest. The settings symbolise the growing gulf between humans and ‘nature’, as if we can go to war with nature and not destroy ourselves.

I’m back in the twelfth century, in Viking Orkney, and enjoying every minute of the research and the writing. Did you know that Vikings of this period thought that trading travel and experience of other cultures broadened the mind and was an educational experience for young men? Not all pillage! The new series will be called The Midwinter Dragon.

Song Hereafter: 1154 in Hispania and the Isles of Albion

‘Perfect,’ she said. ‘There’s nothing like being out at night in the pitch-black on the sort of river men drown in by daylight, with a man so jealous of you he’d let a tree accidentally knock you unconscious.’

That was exactly what Dragonetz was looking forward to – a challenge that could win hearts without sacking a castle, where the only risk was to himself. That, and the sheer enjoyment of learning something new in the company of young men as desperate for action as he was.

‘They’re placing high bets on the outcome. We’re the longest odds,’ he told her with satisfaction. Trying to sound responsible, he added, ‘The men need an outlet for their high spirits, after campaigning hard.’

She wasn’t fooled. ‘As do you,’ she said. ‘Well, if the odds are stacked against you, then you’d better win.’

He felt the rush of excitement coursing through him. ‘I intend to,’ he said.

Her lips tightened in a way that suggested the wise traveller’s disapproval but she said nothing more.

‘I’ll take care,’ he promised her and kissed her. ‘Sleep well.’

Within the hour, Maredudd and Dragonetz were at work, trailing a net between the two coracles, with Rhys and Halfpenny somewhere behind them. Going first should be an advantage thought Dragonetz. We’ll have first pickings and if the fish are disturbed by us, they’ll be wary. But then, perhaps disturbed fish would jump more readily into the net? He had no idea whatsoever, and no intention of asking Maredudd, who would probably bite his head off for making a noise.

Pitch-black overestimated the light provided by the obligatory seven stars but Dragonetz’ elation was only slightly dampened by the chill mist hanging over the water, which rolled endlessly before his fragile craft. His paddle dipped and rose, caught an awkward angle and made a scudding series of splashes. His partner hissed disapproval.

Although unseen, Maredudd was but a net’s length away in his identical one-man boat. The coracle reminded Dragonetz of half a walnut shell, magicked to giant size for some children’s tale of adventure. So light it bobbed and swung with each whim of the current, the coracle was more highly-strung than any horse Dragonetz had ever ridden. Through trial and error, he was learning to place and pace the paddle-stroke or the boat danced in a dizzy circle and tangled the net, earning more tsks through gritted teeth.

Dragonetz could see his end of the net but not where it reached the other coracle and his invisible partner. Maredudd’s skilled paddle made barely a splash above the gush of rills entering the main flow or splitting round drowned trees.

Boulders near the bank broke the verses and the water music sang its journey in Dragonetz’ imagination until he could read the darkness. The east bank was more hazardous, whirls and stops, like a trumpet call then a flute, jarring; the west bank smoother, a consistent shake of tambour, an underlying rhythm. The coracles held to the middle and now Dragonetz could hear where the middle was, by listening to the banks either side. He could hear where Maredudd was by the noises the water made round the other coracle, the soft parting as men, boats and all creatures on and in the river, ran with the current.

All but the fish they sought. This was the season the salmon and sewin ran upriver, driven by an instinct stronger than any current, stronger even than waterfalls, the Welsh Lords had told Dragonetz. Hold your net until they come and they will rush into it like a man to a woman’s arms, for the same urge drives them and they can’t hold back or escape.

Could it really be so easy? Only if the fish came. An owl hooted and a small furry beast screamed. Night noises. And in the swirl of waters, Dragonetz heard something else, something he had only heard in his opium dreams. The river songs took different parts, played each its own melody and yet all harmonised in a beauty that brought tears.

Mists gathered, parted, streaked dragon’s breath across the waters, whispered legends. Caerfyrddin, Myrddin’s place, full of magic. On such a night, anything was possible. Dragonetz’ paddle dipped and rose. He was more alone than he’d ever been in his life yet he felt no fear. The mists thickened, confused the music of the banks but the angle of the net told him he was still heading true, if Maredudd knew his way.

The mist breathed in and out, a living being, and in it shapes formed and murmured to him in the language of another world. Beyond the dragon’s breath, he saw another vessel loom, a barque, one he’d seen before, the heart of the siren-song. He could even distinguish words, ‘Dragon, Dragonetz…’ then the vision wavered into white flames, shivered to wisps and disappeared, taking the ethereal music, leaving the slap of water.

‘You know I could kill you here,’ the voice whispered, disembodied. Dragonetz had been so lost in the night world, he took a minute to adjust, to realise the voice was all too human. ‘Coracles tip so easily and the water is deep and cold. You would not get back into the boat without help.’