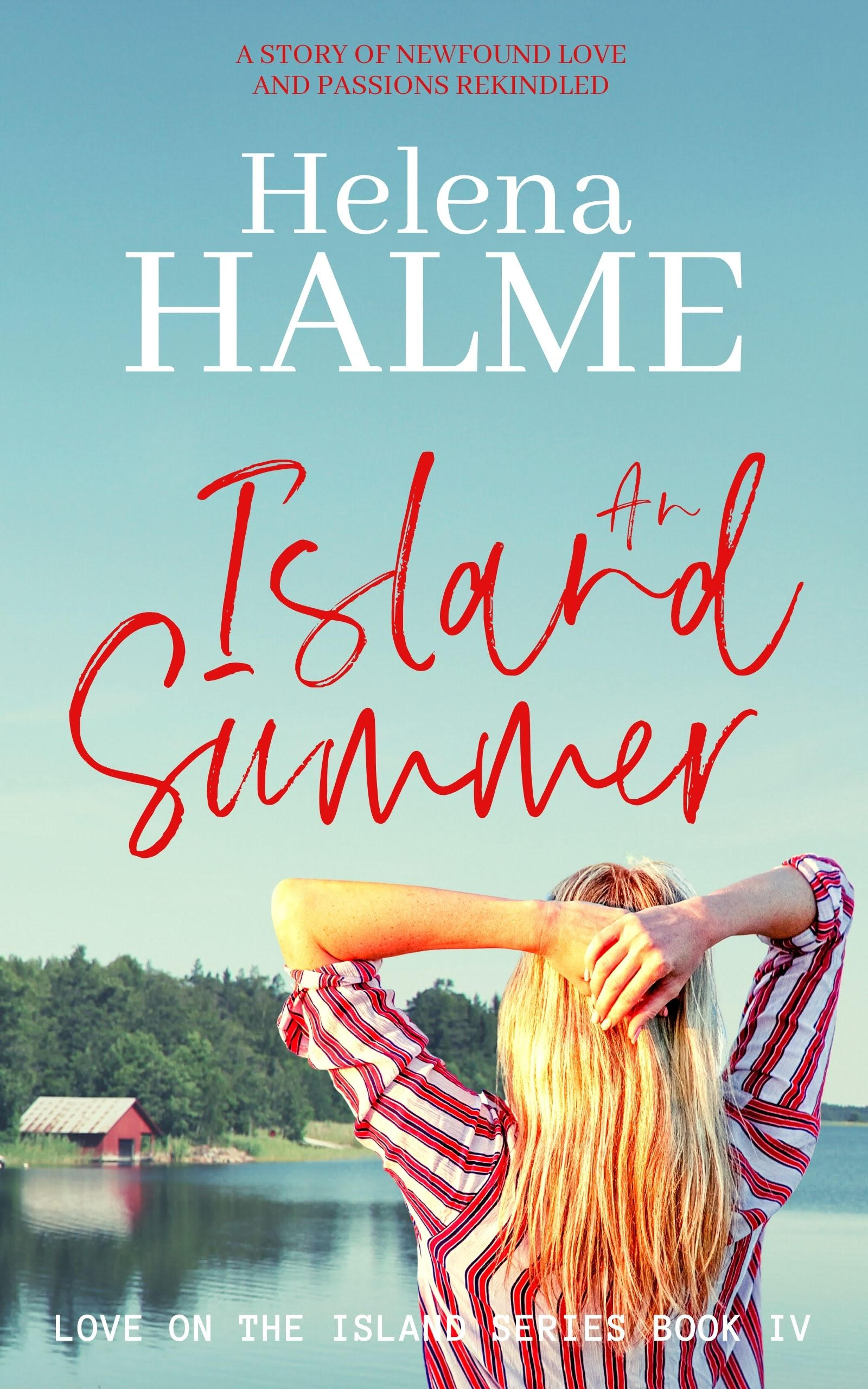 I’m delighted to welcome my Finnish author friend, Helena Halme, who although now living in London and married to “The Englishman” who inspired a series of novels, is here to talk to us about her Love on the Island series, set on the Åland Islands, situated in the middle of the Baltic Sea between Finland and Sweden.

This fast-growing series of romantic novels plunges us into Åland Island life, and so far four titles are available, with the fifth due out later this year.

Over to Helena to tell us more about them…

All the books follow Alicia, whose teenage son, Stefan, dies in a motorcycle accident in London. After her marriage breaks up with the British surgeon Liam, returns to her native islands and has a passionate affair with the Swedish journalist Patrick.

Alicia’s tumultuous relationship with both Patrick and Liam spans the series. We also meet Alicia’s mom, Hilda, her best friend Brit, and her late son’s girlfriend Frida. The four women’s relationships face difficulties as babies are born and elderly parents die. There are long-held family secrets, newly found love, as well dark mysteries on the islands which threaten to destroy both Alicia, her family, and friends.

Helena, what makes the Åland Islands such a great setting for your stories?

Islands have always fascinated me, mainly because they are such contained places, both physically and culturally.

There are no bridges between the mainland and the Åland Islands, so you have to either travel by sea or fly in order to reach the islands. They are also a huge tourist spot, with a small population tripling during the summer months. On top of all that, the islands lie closer to Sweden but are an autonomous part of Finland, where the official language is Swedish.

Is it any wonder that the islanders are very independent and don’t consider themselves either Swedish or Finnish.

There are all kinds of special rules attached to the islands. For example, you cannot own land unless you are a resident and you have to be able to speak Swedish to gain residency, which is a sore point to many Finns.

The islands are a tax-free zone, which increases tourism but also encourages cruise liners to make briefest of stops to the islands when the passengers never even have time to set one foot on land.

All this make the islanders quite insular and quirky. Perfect for a novelist!

What is your relationship with Åland Islands and how much of your life have you spent there?

I have a very personal reason why I set my books on the Åland Islands. For the past thirty years, my mother has been living on the islands (she’s married to a local farmer) and I’ve become ‘a summer islander’ as the locals call me.

I’ve wanted to set a story on the islands for a long time, but it wasn’t until I dreamt up the characters that I was able to do it. Alicia, especially, didn’t really come to me until I had explored many kinds of stories set in Åland.

In my imagination, there was always a locally brought up woman returning to the islands from the UK, because this is something I myself dreamt of doing. (I didn’t want to leave my Englishman, though, so it never happened!)

When I discovered Alicia and the tragic story of the loss of a son, I knew I had an idea for a series. I don’t know any mother who doesn’t constantly fear that something like that happens to their children. Wouldn’t you want to go home where you felt safe in such an awful circumstance? And wouldn’t your marriage suffer? Especially if you blame your husband for the accident as Alicia does?

What challenges do your characters from beyond the island face dealing with the local people?

The person most at odds with the local islanders is Alicia’s ex, Liam. While their son was alive, the family would spend a couple of weeks each summer on the islands, which Liam resented.

Firstly, he didn’t like the food. There’s so much heavy rye bread and other stodgy, strange dishes. And who eats raw herring?

He hated the daily ritual of the sauna. It’s too hot and, he’s certain, bad for your heart. He never learned the language, although the island folk don’t speak much in general, preferring silence to small talk. Which Liam also found odd, and, frankly, rude. On top of everything, Liam gets seasick and hates flying, the only two ways you can reach the islands.

What are your top tips for any readers planning to travel to the Åland Islands?

Definitely do arrive by sea, either via Finland or Sweden. The archipelago is stunning any time of the year.

The summer is the best season to visit. During any other time of the year, the islands and their residents go into a kind of hibernation.

My children used to say that  during the last week of our holiday in August when the schools had already started on the mainland, there was tumbleweed rolling along the main shopping street of Mariehamn, the capital of the islands.

Another top tip is to eat as much of the local food as possible. Liam is wrong: it’s all fresh and lovely and delicious. Try the local speciality, a clafoutis-like oven-baked pancake, Ålandspannkaka. It’s served with local plum preserve and whipped cream. Washed down with a cup of strong coffee, naturally. Unmissable!

The next book in the series, The Island Child, is again set on the Åland Islands. The story centres around Brit, Alicia’s best friend who after travelling the world has settled on the islands with a local sea captain, Jukka. But her past comes knocking with an unpleasant character bringing a nasty surprise to the heavily pregnant Brit. To complicate things, just as Brit is about to give birth, Jukka’s ship runs aground outside Mariehamn. With Alicia’s mother Hilda onboard…

The story will also touch on Alicia’s continuing love triangle with her Swedish lover Patrick and her ex-husband, Liam. Alicia’s mother Hilda also has a new love interest!

The Island Child will be out before Christmas, but is now on pre-order.

EXTRACT from An Island Christmas

This is a short excerpt from the second book in the Love on the Island series, An Island Christmas. It’s a scene set on Christmas Eve, the main day of celebrations on the islands. It’s Alicia’s first Christmas back and she wants the day to be perfect, but her plans are disrupted by the unwelcome arrival of someone she’s decided to forget …

Patrick turns into the Ulsson’s drive and parks the car next to a VW Golf. He turns off his lights and stays in the car for a moment. On the passenger seat is a paper bag filled with Christmas presents wrapped up expertly by one of the assistants at the fashionable interior design shop in town. They are beautifully understated, in white paper with wide red ribbons.

There’s also the large box containing a magnum of vintage champagne resting on the floor of the car. He wonders if that is overkill. Should he perhaps leave the bottle behind and fetch it later, if he gets a good reception from Alicia?

He gazes up to the house, shining brightly in the dark afternoon light, the downstairs windows decorated with large star lanterns. The freshly fallen snow has formed a blanket over the sloping roof and the landscape. With the large pine draped with white lights, the whole scene looks serene and festive, like a TV advert.

Damn it, be brave.

Hilda will appreciate the champagne, he’s sure, so he picks up the box, takes hold of the paper bag, slams the door of his car, and makes his way up to the house.

Alicia cannot believe her eyes. She watches as Patrick gets out of the car, picking something up from the passenger seat. She has her phone against her ear, still talking to Frida. The baby is crying in the background.

‘Can I ring you later?’ Alicia says and ends the call.

‘What the hell does he think he’s doing?’ Alicia says and hurries to the door.

But Patrick is quicker than she is, and by the time she opens the door, he is already standing there, a wide grin filling his face. He’s carrying a bag full of presents and a large box.

‘Patrick, what a lovely surprise!’ Hilda says. She’s standing behind Alicia, who’s unable to move or speak. At her mother’s words, she turns to scowl at Hilda. She widens her eyes at her daughter. ‘Come now, let the poor man in. He must be freezing.’

Patrick smiles at Hilda and steps past Alicia, who is still holding onto the door handle. Alicia gets a waft of his perfume and the smell of the crisp outside. She tries not to let his rousing presence affect her judgment.

What is he playing at? He must know Liam is here?

‘Alicia, close that door before we all catch our death,’ Hilda says.

Patrick hugs Hilda. He hands her the box he’s holding and when she sees what it is, she exclaims, ‘Oh, my goodness. Thank you and Merry Christmas to you too!’

‘I’m sorry I’ve come unannounced, but I thought I’d drop my presents off. I didn’t get a chance to do it before today, but I won’t keep you.’

With that, he turns around and hands her the bag of presents.

‘Happy Christmas, Alicia.’ His voice is soft and he bends down to give her a kiss on the cheek while grabbing the door handle, ready to go back outside.

‘Patrick, you can’t leave without at least having a drink with us!’ Hilda exclaims.

Alicia rolls her eyes at him, but he either doesn’t see her or ignores her on purpose and, smiling at Hilda, continues, ‘If you’re sure?’

FOR MORE INFORMATION ABOUT HELENA HALME

If, like Helena Halme (and Agatha Christie!), you love stories set on islands, you can also take a trip to Ithace, Greece in the company of Sophie Sayers in my sixth novel about her, Murder Your Darlings.