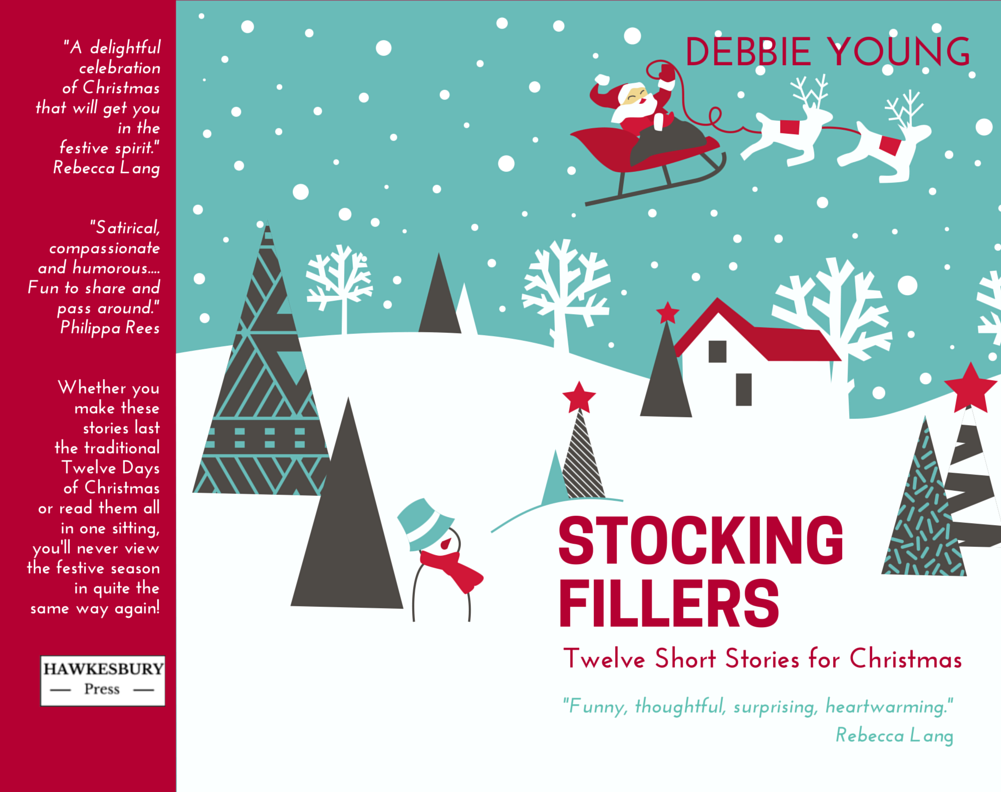 Regular readers may remember that I published a collection of festive short stories last year in time for Christmas with a festive red cover, featuring a stylised Christmas tree design.

Or at least, that’s what I thought it was. But when a bookseller remarked that she didn’t know what it was meant to be (despite the hint of snowflakes at the corners), I decided that perhaps that it was a bit of a Rorschach ink blot test. Looking again, I considered it could be interpreted as a shooting star, or star of Bethlehem, or a hundred and one other things.

I therefore determined to refresh it for Christmas 2015 with a more straightforward design, and the result was the jolly affair pictured below, reminiscent of a vintage Christmas card. (I hope it’s uncontentious that it’s Santa at the top there.)

I rustled up both these designs with some fab free software called Canva. Or least, it’s free till you’ve sold over 1,000 copies of the book. By the time that happens, I’ll be happy to pay the necessary extra out of my royalties.

I then got carried away and redesigned the covers of my other seasonal short stories – the two stand-alone single shorts, Lighting Up Time and The Owl and the Turkey, pictured in the masthead at the top of this blog.

Then I spotted the opportunity to enter a cover design competition run by a publishing services company called CompletelyNovel. They’re a partner member of the Alliance of Independent Authors, of which I’m an author member. I don’t usually enter competitions, but thought I’d go for this one just to be supportive, and thought no more about it until a cheery message arrived in my inbox congratulating me that my cover had been shortlisted for the award. Of course, I was very chuffed.

The shortlist of 20 covers, 75% of which have been designed by specialists, is now displayed on CompletelyNovel’s website, and you’re invited to vote for your favourite here. If you’d care to vote for mine, that would of course be lovely – but to be honest, I’m happy just to have made it this far, not least because I know that the shortlist was chosen objectively by CompletelyNovel’s experts, whereas the ultimate winner will be the one who receives the most votes from members of the public. Any competition open to public voting ends up being a bit of a “who’s got the most friends?” competition – or at least, “who is brazen enough to put the most pressure on their mates?” contest!

Once I’ve sold enough copies, and my budget justifies it, I shall invest in professional covers for my books, but in the meantime, to have gained this accolade gives me the confidence to go on doing-it-myself, particularly for the short stories which are never going to be big earners, because short stories, whoever writes them, never are huge sellers. The cover for my debut novel, Best Murder In Show, will be revealed early in the New Year, so watch this space.

And finally, if you’re looking for a jolly Christmas read, or for a, er, stocking filler present (more commonly known as stocking stuffers in North America) for a friend or relation, you can buy the new-look Stocking Fillers as an ebook or paperback from all the usual suspects. If you have trouble tracking it down, let me know and I’ll post one to you myself. The content is exactly the same as in the old red book, of which I have a few copies left, if anyone prefers it. Signed copies of the paperback are also available on request, to add the personal touch to your gift.

To read more about my short stories, click here.

To read about my latest short story ebook,
which happens also to be my very first short story to be published,
before ebooks were invented, click here.