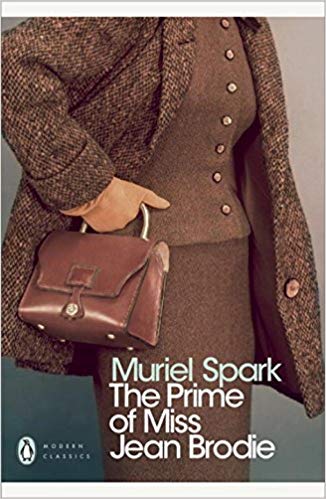 When I launched Secrets at St Bride’s, the first in my new series of school stories for grown-ups, (the story revolves around the staff rather than the pupils), I began to realise just how many of my author friends also loved school stories. I’m therefore inviting them to share on my blog their enthusiasm for their favourite.

So far in this series we’ve had novelists Jean Gill, talking about Anne of Green Gables and Helena Halme on Pippi Longstocking – to that’s a Welsh author on a Canadian story and a Finnish author on a Swedish one! This time, I’m pleased to welcome British historical novelist Clare Flynn talking about the Scottish modern classic, The Prime of Miss Jean Brodie by Muriel Spark.

Although I’ve known of the book for a long time, it’s one of those that I was meaning for years to get round to, and only managed it a couple of years ago. I’d also put off seeing the film until I’d read the book – so the film is now on my to-watch list!

Over to Clare Flynn to tell you about why she chose Muriel Spark’s The Prime of Miss Jean Brodie as her favourite school book.

Clare Flynn, welcome to my blog! Before we begin, can you please just tell us a little about yourself for readers not already familiar with your historical novels?

I’m the author of ten historical novels and a collection of short stories. My tenth novel, The Pearl of Penang, set in Malaya around the Second World War, was published on December 5th and is the winner of The Selfies UK Awards for the UK’s best self-published novel for adults. I live on the Sussex coast and an a former Marketing Director and management consultant.

When did you first read The Prime of Miss Jean Brodie?

I can’t remember whether I read the book first or saw the film – probably around the same time and I would have been about fourteen or fifteen. I think my mum was reading it and I probably pinched her copy. I’ve recently read it again – fifty years later. Shriek!

I really enjoyed re-reading it although I can’t help hearing the unmistakable voice of Maggie Smith as Miss Brodie – impossible not to. Spark’s writing is beautiful. It defies the test of time.

I wonder whether I’d have found it harder to relate to now if I hadn’t got this nostalgic link to my past reading. Miss Brodie’s girls lived a world far removed from the experiences of schoolgirls today with their phones and social media. Yet there is so much about human nature that is still very relevant today.

I loved the waspish humour, in particular the way it so deftly nails Miss Brodie’s overbearing certainties and incapacity to admit alternatives. In virtually all of her absolute certainties she is to be proved wrong. It is a real lesson in hubris. In some ways, Jean Brodie is a monster – her espousal of Mussolini, Franco and Hitler (later modified to a post-war admission that ‘Hitler was rather naughty’), her determination to shape and mould her girls in her own image. Yet at the same time her desire to ‘put old heads on young shoulders’, to inspire and to stretch her pupils way beyond the confines of a narrow curriculum are praiseworthy. I’d have enjoyed being in her class.

I love the constant repetition by both Miss Brodie and her girls that she is ‘in her prime’ and they are the ‘creme de la crème‘. Miss Brodie has a complete absence of any sense of irony – Muriel Spark however has it in spades.

Here’s a typical example of an exchange between her and her pupils:

‘Who is the greatest Italian painter?’

‘That is incorrect. The answer is Giotto, he is my favourite.’

Or this, regarding a poster the headmistress has stuck on the wall:

‘This is Stanley Baldwin, who got in as Prime Minister and got out again ‘ere long,‘ said Miss Brodie. ‘Miss Mackay retains him on the wall because she believes in the slogan “Safety first”. But Safety does not come first. Goodness, Truth and Beauty come first.’

Structurally the book is clever the way it jumps back and forward in its timeline – so that from the beginning the reader is aware of the future fates of the Brodie set and their teacher and her ‘betrayal’. This is a hard act to pull off by a writer and Spark succeeds brilliantly. In fact, the whole time we are a party to Miss Brodie’s self-delusion, her misplaced assumptions – particularly about Sandy.  Within the first few pages we are told what each girl is ‘famous for’ – Rose ‘for sex-appeal’, Eunice ‘for spritely gymnastics and glamorous swimming’, Sandy ‘for her small, almost non-existent eyes’ and Mary MacGregor ‘for being a silent lump’. Just a few pages later in Chapter 2 we are to discover that at only twenty-four, Mary MacGregor is to die in a hotel fire, Sandy of the little ‘pig-eyes’ is to sleep with the art teacher, ‘betray’ Miss Brodie and then become a nun.

Spark is wonderful at creating a vivid sense of time and place. I was immediately pulled into the world of pre-war Edinburgh. Very prim, Presbyterian and proper.

I suppose I identified with the girls, particularly Sandy and Jenny – at least my memory of myself at that age. I loved the scenes where those two write romances in which their teacher engages in passion-fuelled entanglements with fictional heroes. I used to write daft stories all the time (when I was around eleven or twelve) and turn them into plays to perform with friends.

The two girls write imaginary letters between Miss Brodie and the music teacher. The last of which – when they fictionalise her declining his marriage proposal – ends

‘Allow me, in conclusion to congratulate you warmly on your sexual intercourse, as well as your singing. With fondest joy, Jean Brodie.’

I remember two or three teachers who made a big impression on me – but none in the kind of suffocating and exclusive manner Miss Brodie employed.

How did the book affect you as a child and influence you as an adult?

As a child, I was probably grateful I didn’t live the restricted life those Edinburgh girls did. I had access to television and radio – to pop music, to parties, to weekend/ holiday jobs to earn some cash – and so probably grew up faster.

In other ways, my own schooldays were similar. My school was full of teachers that were comparable with those at Marcia Blane Academy – numerous post-war, aging spinsters for whom we would create interesting backstories about how their motorbike despatch driver fiancé was killed in occupied France, or their true love blown up in the Blitz. None of them struck us as being in their prime! Mostly well over-the-hill so, instead of being unduly influenced by them, we felt rather sorry for them.

Muriel Spark was one of many good writers I read and absorbed from a tender age and I believe all of them must in a subliminal way have influenced my own writing. I just wish I had a fraction of her talent!

I went to a direct-grant Catholic convent then, after we moved, to a state girls’ grammar school before the comprehensive revolution began.

Books were a private world for me – mostly to escape from being part of a large noisy family! I shared my passion with one friend in particular and we would recommend books to each other.

Would the book still resonate with young readers today?

I hope so, but somehow, I doubt it. It is such a world apart and these days there is an expectation of ‘relatability’ – which is rather a shame.

Thanks for giving me the excuse to go back and read this again, Debbie!

Find out more about Clare Flynn’s excellent historical novels via her website www.clareflynn.co.uk, where if you sign up for her readers’ newsletter you may claim a free download of her collection of short stories, A Fine Pair of Shoes. You can also find her on Facebook as authorclareflynn, on Twitter as @ClareFly and also on Instagram as @ClareFly.

Next time in this series I’ll be talking to another historical novelist, Helen Hollick, who will be sharing her passion for stories about quite a different kind of school to Miss Brodie’s – Ruby Ferguson’s Riding School!

For more information about my School Stories for Grown-ups, and to read the first chapter of the first in series for free, click here.