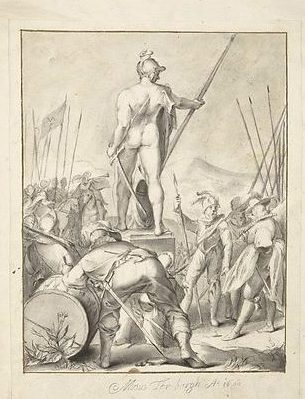 I love new beginnings, whether of a month, a season, a school term or a year. When I’m feeling restless, as I always am by this time of year, any excuse for a fresh start will do.

So you may imagine my delight that 1st March not only marks the start of a new month and will usher in a new season, but it is also the beginning of the ancient Roman ten-month year.

Yes, ten months – which explains why our names for the ninth, tenth, eleventh and twelfth months are confusingly based on the Roman numerals for seven, eight, nine and ten – septem, octo, novem and decem.

Of course, the winter months that they eventually designated January and February existed, but for a long time they refused to acknowledge them with a name, as if in punishment for their lack of productivity.

Three new beginnings in one fell swoop! My only disappointment is that March was so called in honour of the Roman god of war, because it was considered the right time of year to resume military campaigns interrupted by winter. Mars was also considered a guardian of agriculture, and his month the beginning of the farming year. If the Roman Empire had had a 21st century-style advertising industry, Mars would have been the obvious poster boy for gardening products designed to wage war on weeds.

To my peace-loving brain, the mention of the name Mars is more likely to conjure up the image of the classic chocolate bar than of the Roman god of war. (Other chocolate bars are available, as the BBC might say.)

According to Google, the British Task Force took three million Mars bars to the Falklands in 1982. The manufacturer’s marketing department must have been tempted to add “fight” to its famous catchphrase, “A Mars a day helps you work, rest and play”.

But that has nothing to do with the naming of the bar, which by the time of the Falklands War was fifty years old. Like its arch-rival Cadbury’s chocolate (founded 1824), the bar and the company was named after its founding family.

In 1932, in the unlikely setting of Slough, one Forrest Mars, Sr. devised his eponymous snack. The son of the American industrialist Frank C Mars, Forrest belonged to the second generation in a dynasty of candy manufacturers destined to became the richest family in America. This bevy of billionaires still owns the confectionery company – a refreshing change when so many great brands, including our beloved Cadbury, have been absorbed by vast international conglomerates with less cosy names. (Mondelez International in the case of Cadbury – who knew?)

A more scientifically-minded (or less greedy) person than me might sooner associate the name Mars with the Red Planet, which, like Earth, has four seasons, but each lasts twice as long as ours, due to the 687 days in the Martian year.

That’s a long haul between new beginnings. One of many reasons that I’m glad to be starting another spring on Planet Earth.

This post was originally written for the March 2022 issue of the Tetbury Advertiser.

Both my series of novels begin with a young woman starting afresh in a new home – Sophie Sayers in the Cotswold village of Wendlebury Barrow in the Sophie Sayers Village Mysteries, and Gemma Lamb at the quirky English boarding school for girls in the Staffroom at St Bride’s series.

Follow their adventures from the start in Best Murder in Show and Secrets at St Bride’s, both available as paperbacks, ebooks and audiobooks.