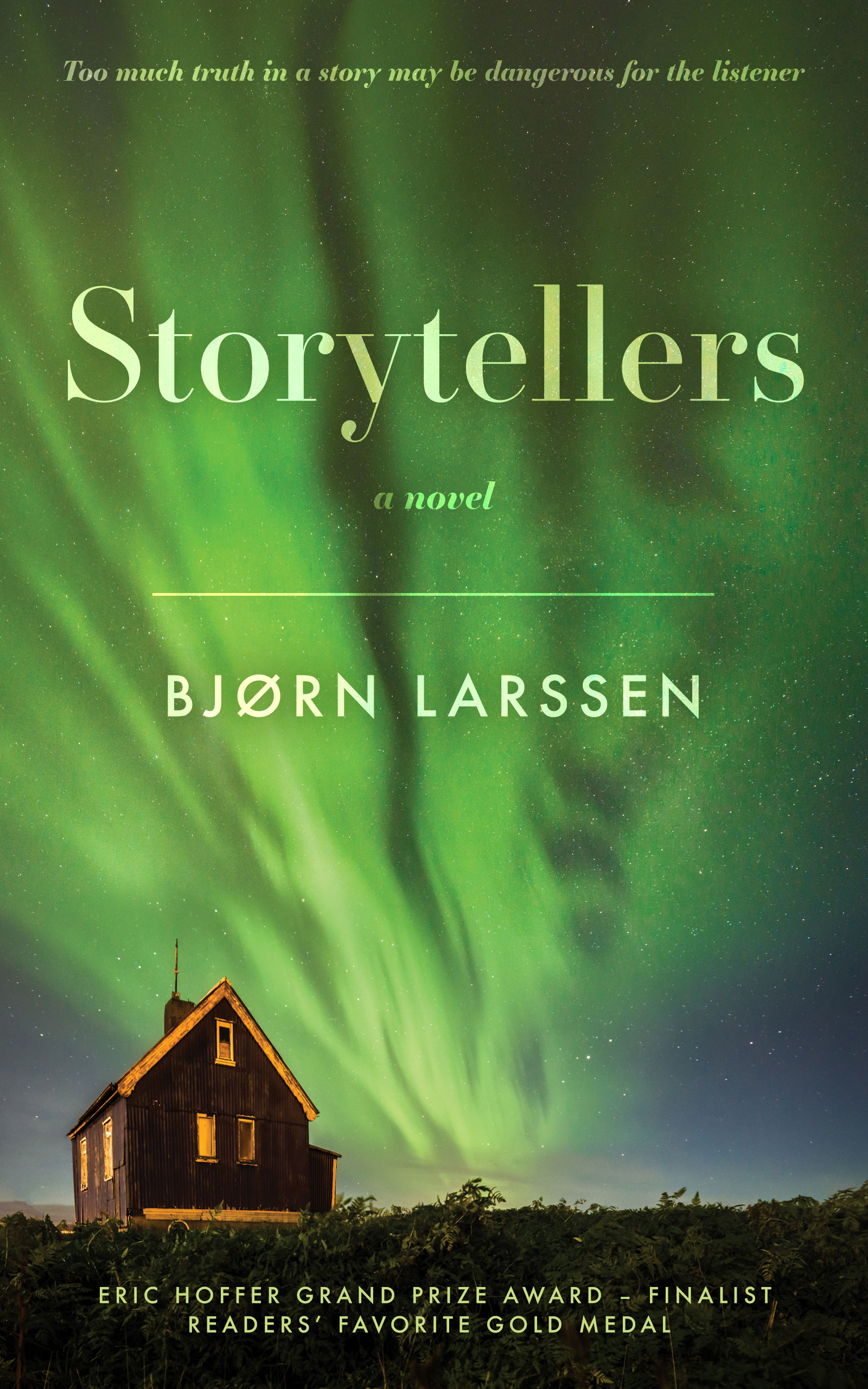 In a year when there have been so many constraints on travel, I’ve really enjoyed touring the world through the pages of good books and sharing some of my favourites with you on my blog. I’ve saved for my final post in this series, and of 2021, for an author who blew me away with his vivid debut novel set in Iceland, Storytellers. I’m delighted to welcome Bjørn Larssen – who describes himself as “writer, blacksmith, spiritual Icelander” – to tell us why he is so passionate about that country, and how it has inspired his writing.

Bjørn, welcome! Please would you kick off by describing the location of Storytellers.

I set Storytellers in Klettafjörður, a non-existent village on the Icelandic coast in the south-west. Originally I picked an actual village, but as the story continued to develop I realised its inhabitants might not be happy about it… and I’d like to make more friends there before I start on the enemies.

Please give us a brief description of Storytellers.

In Storytellers, a historical suspense novel set in 1920, Gunnar, a hermit blacksmith, finds an unexpected guest on his farm one night… a guest with a broken ankle and a story to tell, one that might change Gunnar’s life by ending it – once the storyteller recovers enough to write the other characters’ final chapters.

I believe there’s also in the pipeline another, quite different book set in Iceland – what will that book be like?

My work-in-progress, currently called Untitled Romance because I’m very creative like that, will be an m/m sweet-with-heat romance (duh) set in Reykjavík and its surroundings.

The book is not just about the love between the characters, it’s my love letter to Iceland as well.

There is more coming. I’m unlikely to stop writing about Iceland.

What makes Iceland such a great setting for your stories?

I needed a location that could be simultaneously claustrophobic and far away from everything, and I specifically wanted some of the characters to be fishermen. As I was writing the first draft I didn’t have any particular place in mind. At the same time I was listening to Ásgeir’s debut album, Dýrð í dauðaþögn (Glory in the Silence) on a loop and suddenly it occurred to me that Iceland was an actual country. Until then I just sort of imagined it as some mythical spot with a Björk in it.

I bought a book about the relevant period in Icelandic history, Wasteland With Words: A Social History of Iceland by Sigurður Gylfi Magnússon, and it turned out that Iceland had been created especially so that I could set my book there. Although maybe it was the other way round.

What is your relationship with Iceland and how much of your life have you spent there?

I corresponded with a historian at the Reykjavík City Museum and the Árbæjarsafn open-air museum, who helped me a lot. Still, I had a lot of specific questions and wanted to get a feel for the place, and that open-air museum had buildings from the exact period I was writing about. It was supposed to be a four-day outing with some geysers, waterfalls, or whatever they had there. Instead I fell in love with the strange planet that Iceland is. The year after we went for an entire month, because I was hoping to get over the infatuation. It only got worse.

I intend to live there someday, my heart already does.

What is special about the people native to Iceland?

In the 19th century Iceland had the highest literacy rate in the world – and most of its inhabitants wrote (they still do) diaries and poems. In Halldór Laxness’ novel, Independent People, farmers who meet for a funeral first discuss deworming their sheep, then read the poems they have written since they’d last met. I thought that was dark comedy. It wasn’t.

Iceland is one of the most expensive places in the world. The Bónus supermarkets are your friends, but they don’t sell alcohol – no shops do, except for designated liquor stores. If you want to chat over a beer or two either stock up at the airport, or drive to a liquor store, or be prepared to pay one kidney per pint of beer. In the bars you’ll be able to chat with fellow tourists, because Icelanders socialise in the public pools.

For the love of Gods, don’t buy bottled water in a place where the tap water comes straight from the glacier. (That’s cold tap water. The hot water comes from the geothermal springs. You’ll get used to the rotten egg smell, but if you dyed your hair, do not wash it with this water. I found out the hard way.)

If you want to see the Northern Lights, go between October and March, in the beginning of April it never gets dark enough anymore. Which means you can go for a drive at 2am and have the normally crowded tourist spots mostly to yourself.

Icelandic national dishes are (whispers) horrible. Kjötsupa, the meat soup, and the baked goods are exceptions. Ethics aside, you really don’t need to try the shark or the whale, just buy any old rotten fish and dip it in vinegar mixed with salt. Instead, find the hot dog booth near the Saga museum, which is by the way incredibly disappointing – they sell the best hot dogs in the world. Literally. Award-winning. They taste like hot dogs.

And do NOT touch the moss. Just don’t.

“Only in Iceland” – name three things that could only exist/happen there.

Are there any other books set in Iceland that you’d like to recommend?

Halldór Laxness, obviously. I haven’t read Ragnar Jónasson’s books, because thriller is not my genre of choice, but I hear he’d murdered half of the country by now and did so rather interestingly. I still need to get to Burial Rites by Hannah Kent. And you can’t go wrong with Alda Sigmundsdóttir’s Little Book of Icelanders series, although those are technically non-fiction.

Where is your latest book set and where will the next one be set?

Children, a dark-but-funny re-telling of selected Norse myths, is set in the heathen Nine Worlds – and its sequel, Land, will add the tenth world, Earth. Land will be a re-telling of Hrafnaflóki’s discovery of Iceland, but with more Gods, magic… and the Hidden Folk, of course.

“Sshh,” Arnar whispered. “Put on your coat and come outside.”

Where are we going, Juana wondered, half-asleep as she crawled through the small door. The cold night air roused her within seconds. It was cool inside the hut, but outside it was freezing, everything covered in a thin layer of ice, lit by moonlight, and, and…

“Look at the sky,” he whispered. Juana obediently raised her eyes, and her mind went blank as her mouth opened in shock.

Something that resembled green fire danced in the sky. The colours moved faster, then slower. They disappeared, then reappeared, regrouping stronger, covering the stars. Their shine was so powerful that the frozen grass appeared greener than during the day, a gleaming colour she had never seen before.

“There,” Arnar pointed, and Juana’s eyes followed. The flames painted the sky, slowing down, stopping as if teasing, then returning to their dance with renewed energy.

“Is this magic?” she whispered. “Is it mountains changing shape? Is the sky burning?”

Juana shivered from the cold, but she didn’t care, fascinated by the magical lights. If there was a pattern to their dance, she couldn’t understand it. The green colour was now being licked by a hint of purple, as if the flames themselves were set on fire again. But the fire she had known until now never looked or felt like this, it never obscured the stars or cast a greenish glow. “Are you sure this isn’t dark magic?” she whispered and made a sign of the cross.

“This is the fire that burned in my heart every day that I spent in America,” said Arnar, holding her hands tight and kissing her cheek. Juana didn’t pay him much attention, staring, trying to understand the impossible. Only God or Devil could create something like this, and the beauty convinced her it was God himself. He was giving them their blessing. “This is what happiness looks like,” whispered Arnar, and she believed him.

ORDER YOUR COPY OF STORYTELLERS HERE
(available in paperback, hardback, ebook and audio from a wide range of stores)

My guest post series for 2022 will address travel from a completely different angle.

Under the series heading “Me and My Mini”, a diverse range of authors will share their passion for their Mini cars, past and present – a car that started to fascinate me when I was writing my new novella, Mrs Morris Changes Lanes, earlier this year.

Posts in this series will appear on the last Wednesday of each calendar month. Click here to read a test-drive I took with this idea a couple of months ago, when historical novelist Anita Davison took us for a spin.

In the meantime, if you haven’t already read Mrs Morris Changes Lanes, now would be a good time to try it! Order the paperback from your local bookshop quoting ISBN 978-1911223818 or online here, or download the Kindle ebook here. (If you’re a Kindle Unlimited subscriber, you’ll be able to read the book for free!)

And if you have already read and enjoyed it, reviews are always welcome!

In the meantime, wishing you a very happy, healthy and peaceful 2022.