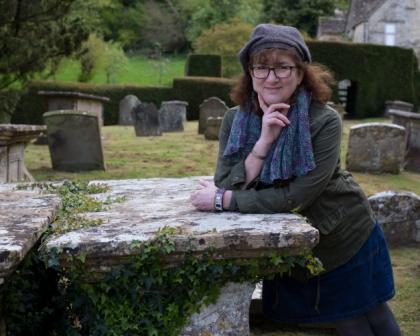 As I was planning my current work-in-progress, Beastly Business at St Bride’s, the fourth Gemma Lamb Cozy Mystery, I realised I’d have to choose the names for three new characters – a task I always enjoy.

I’ve shared on this blog before how I named Sophie Sayers and Hector Munro in my Sophie Sayers Village Mysteries – you can read them here:

I’ve even disclosed how my husband and I chose our daughter’s name, which one of my most popular posts ever on this blog. You can read it here:

(Funnily enough, if she’d been a boy, we would have named her Munro!)

I have fun with minor characters’ names too, eg giving Sophie’s self-centred ex-boyfriend Damian Brown the grander stage name of Damian Drammaticas, in homage to veteran BBC news journalist Damian Grammaticas. For years, we’ve loved his name so much (and his work) that a cheer goes up in our house whenever he pops up on the radio or television.

In my Gemma Lamb Cozy Mystery series, set at St Bride’s School, I took delight in christening the headmistress Miss Harnett, which I immediately realised would allow staff and girls to nickname her Hairnet.

I’ll share insights into the origins of other characters’ names in future blog posts. But in the meantime, I thought I’d share how some of my author friends name the characters in their novels. The results of a quick straw poll among my writer chums produced entertaining results. (By the way, I’ve listed links for every author quoted at the end of this post so that you can look them up and find out more about their books.)

Jane Lovering is refreshingly straightforward and sensible: “I choose names based on the background of my characters, their age, and names that were popular when they were born. Jessica Redland takes a similar stance: “I don’t tend to go for quirky stand-out names as I want readers to feel like they’re everyday people.” Clare Flynn has an endless source of inspiration for the names in her historical novels: “Gravestones” was her one-word reply!

Many authors raid their family history for inspiration. Tracy Baines gives a heartwarming example: “My character Letty in The Women of Fishers Wharf is named after my grandmother who set me on my writing path by telling me family stories when I was a child.” Similarly, J A Baker reports, “I’m a genealogy fan and use names of my ancestors”.  “Family trees are a great source of names,” says Alexandra Walsh. “I’ve used pretty much every family member at some point in a book, first name and surname, although never combined,” says Jessica Redland. “My mum is a big fan of my books, and she gets really excited when she spots a family member’s name in my books. She loved it when she and my dad appeared together as customers in a cafe, although she did tell me I had their ages wrong, and i had to remind her that they were fictional, and I’d only borrowed their names.” Kim Nash made me smile: “There’s in a dog in my latest book called Gladys, after my Nan. I hope she wouldn’t mind!”

Which brings us neatly onto the inspiration that some authors take from their pets. Says Keri Beevis, “Ellie in The People Next Door was named after my cat.” Similarly, Felicity in Find Her Alive honours her tortoiseshell cat; a shapeshifter in For Heaven’s Cakes is called after Beau, her black labrador, and a cowboy in Loving Lydia is named Sam after her ginger cat. Dawn Brookes chose the surname of her cozy mystery protagonist Rachel Prince for the love of her childhood dog Prince, who used to put his head on her knee while she read.

Inviting readers to designate characters’ names is a popular option, often as the prize in a competition. “I do check they’re happy to be murdered, though!” says Keri Beevis, who has named some fictitious victims this way.

Some authors simply pick names at random, although this can cause the occasional hiccup. “I just use whatever pops into my head,” admits Valerie Keogh. “Which is why I had three male characters in one book named David. Fortunately I picked that up and fixed it on second draft!” Phoebe MacLeod “just picks names that I like, that I think suit the age of the character – although I will confess to naming someone after a person I liked from ‘Married at First Sight in Australia’.

“Oh, and Fred and Breakfast has a character called Rita who is named after someone I used to work with and disliked intensely many moons ago,” adds Phoebe. Revenge was also sweet for Jessica Redland: “I had a boss who bullied me and made me cry, so I have him appearing in one of my books. I can’t kill anyone off as it’s not the genre I write, but I did get him sacked, which gave me great pleasure!”

7 TRIBUTES TO OTHER AUTHORS

As you’ll know if you’ve read my post about Sophie Sayers – or might have guessed even if you haven’t – I chose Sophie’s surname in honour of my favourite mystery writer of all time, Dorothy L Sayers. (I’d already named one of my cats Dorothy!) Similarly, Jessica Redland pays tribute to the author of the Pollyana books, Eleanor H Porter, in Starry Skies Over Starfish Cafe, giving Porter’s surname to her character Tara, whose father helps her see the positive side of things by playing Pollyanna’s famous Glad Game.

I’m rather taken with the way some authors choose characters’ names to reflect a book’s theme. Movingly, in Jane Davis‘s novel about missing teens, A Funeral for an Owl, all her characters’ names were hybrids of teenagers’ names on a missing persons website.

In The Wind Chime, Alexandra Walsh “tried to use names related to stories and myths about water because the house at the centre of the story is on a cliff.” Sheila Riley‘s themed choices are more sinister: “I give my antagonists the names of poison plants and bitter herbs: Blackthorn, Darnel and Celandine are just some of the names I’ve used for the baddies my my books.” But it’s not all grim. She continues, “In my new Beamer Street series, I have a Mary Jane Starling. Although small and pretty, a starling is feisty, totally determined and territorial – a great name for my heroine.”

Sarah Bennett has themes galore in her books. “In my first series, the three sisters were named after a trio of Greek goddesses as their father was a university professor. In the second, the three friends were all called Elizabeth, as i went to school with three other Sarahs in my class. I chose Elizabeth because it has lots of diminutives. In my third series, they were Arthurian names as there was a legend that the family castle was the original site of Camelot. I had characters named  after mermaid legends in Mermaids Point, and in my current series the four older siblings have 70s rock star names, as their parents were a bit rebellious.”

Amie McCracken enjoys hiding meanings within her characters’ names. In Leaning into the Abyss, Rhea and her sister Phoebe are named after moons because their mother was an astrophysicist, while the antagonists, the parents of the dead, are named Hurakan, after a Mayan god of storms, and Dolores, Spanish for sorrows.

The heavens also inspired Jean Gill when naming the central character in her historical novel, Song at Dawn. Over to Jean: “The girl wanted to be a troubador, and as with rock stars today, it was common practice to take on stage names. What would have inspired her? What would she have seen,, on the run, desperate, waking from a night in a ditch? I know because I live in Provence and see it every morning: beautiful and an inspiration. “Stella,” I though, coming up with the Latin term for star. Then, thinking of Venus, or the morning star, as we so often call it, I turned to my Occitan dictionary, and Estela de Matin was born.”

Latin is also the inspiration for author Alison Morton who writes alternative history thrillers set in Roma Nova, where the character names follow Latin structures. “Carina derives from cara, the Latin for beloved,” she explains. “While carinare means to grow a shell as a bulwark or protection. My main character certainly has to do that.” But when we first meet Carina, she is living under the anglicised Karen. Only later does the adopt the name of Carina Mitela, taking her Roman mother’s surname.

Now back to my current work-in-progress, where I’ve had fun naming new characters for the next Gemma Lamb Cozy Mystery. In Beastly Business at St Bride’s, in which the girls are encouraged to set up their own businesses (with startling results). I needed a lavish name for an elusive tycoon who sponsors a new girl at the school under mysterious circumstances. Inspired by a byline I’ve often seen in The Times, Sophia Money-Coutts (which I’ve always thought sounded like someone in the pages of a novel), I plumped for Sebastian Goldman-Coutts. Imagine my astonishment when searching online just now for her website to credit her, I read this at the top of her home page:

To find out more about Sophia Money-Coutts, you can visit her website at www.sophiamoneycoutts.com. Or you can look her up on Wikipedia, where you will find that yes, she is related to the private banking family, and that she has a brother, who is a magician named Drummond Money-Coutts. Talk about a name to conjure with….

To find out more about Sebastian Goldman-Coutts, his mysterious ward and his even more mysterious chauffeur-cum-gardener, you’ll have to wait till Beastly Business at St Bride’s is published in the autumn . In the meantime, you can enjoy the first three Gemma Lamb cozy mysteries, with its lively cast of characters with equally outlandish names.

Plus this Friday sees the launch of the new Boldwood Books editions of the fifth and sixth Sophie Sayers Village Mysteries:

All of my novels are available online and to order from all good bookshops – just let me know if you’re having trouble tracking any down.

Now I’d better get back to Sebastian Goldman-Coutts and friends….

With thanks to my author friends for sharing their top tips for naming characters – clicking their names will take you to websites to tell you more about them:

One thought on “9 Ways Authors Choose Their Characters’ Names”